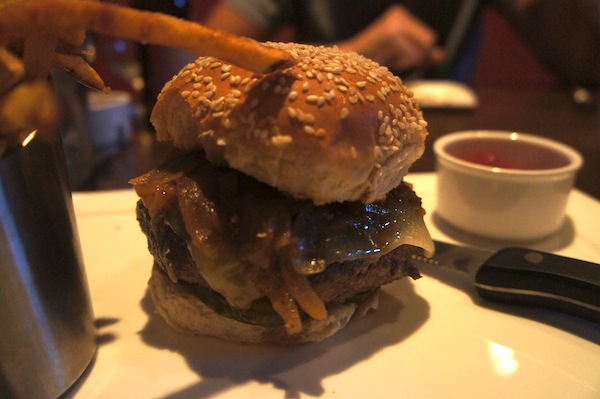 The Crimson Tavern – a new contemporary American restaurant – recently opened inside the Orlando Airport Marriott off of Semoran Blvd with a focus on sourcing local ingredients. This is a worldwide theme among the Marriott hotel restaurants, as those who are familiar with Siro: Urban Italian Kitchen at the World Center Marriott and Primo at the JW Marriott Grande Lakes know, there has really been a big push in the past few years to source higher quality, local ingredients. Primo is one of the first to lead the way here in Central Florida in that philosophy.

They take the locally sourced concept up a notch here at Crimson Tavern, under the helm of Executive Chef Tony Hull, with a 5000 square foot chef’s garden at the back of the hotel near the pond.

Where there used to be a mostly unused volleyball court, now sits a space that could be used for events as well as rows of chard, peppers, herbs, mango and other delightful and surprising vegetables and fruits. These greens are then picked to be used as ingredients for the night’s specials or other dishes, whatever mother nature allows.

Peppers growing in the chef’s garden

For those ingredients not found in their garden, they source heavily from a list of local farms and companies such as:

As a part of a recent media dinner at The Crimson Tavern, I was able to experience some of the offerings found here at the new restaurant. Inside the hotel, the restaurant takes over the space previously occupied by the Porterhouse steakhouse and is now refurbished with dark reds and grays, giving it an almost American colonial feel.

The dinner menu is comprised mostly of small plates and appetizers conducive as accompaniments to drinking, but there is also a list of heartier entree items like steaks, fish, burger and pork dishes if you so choose.

For a tavern, I would have expected more than 6 of the craft beers listed on their menu, in addition to the usual line up of domestics and imports, but maybe they will be adding more in the future to their drink offerings. There is however a very nice selection of cocktails and wines along with the beers that guests can enjoy.

Starting off at the top of the menu is their selection of cured meats and cheeses entitled “Room & Board” with plates like salumi, Benton ham, and cheeses.

The Benton ham selection is a colorful board with cured Tennessee country ham with a side of pepper jelly and delicious warm baked biscuits.

Also, the Australian goat feta cheese with olive oil cheese plate selection was savory and decadent – I wanted to finish the whole plate of cheeses. I think I would have been satisfied with just these three dishes for the meal.

Benton Ham 9
tennessee country ham with a side of pepper jelly, warm biscuits

The African and southern influenced Black Eyed Hushpuppies, served with a cilantro chutney, was a delicate, interesting take on the usually boring appetizer.

The House Burger, made with juicy, tender beef and topped with caramelized onion, gruyere cheese, house made bread & butter pickles, on sesame bun was one of my favorite burgers that I have had this year but may be a bit pricy at $16.

The ribeye steak with house mustard greens was also a favorite, very tender and flavorful with a nice sear at the perfect requested medium rare temperature.

There were a few items that I weren’t such a big fan of like the Smoked Trout Rillette, which needed a little more creamy texture and flavor, and the Boudin Noir Sausage with apple slaw and the beef cheek empanadas which both had some flavors that I personally disagreed with.

Make sure to save room for dessert though, as the Crimson Tavern’s specialty “Knickerbocker Glory” is definitely something to try. The Knickerbocker Glory is named for the traditional british ice cream sundae, made with locally crafted milk gelato from Muse Gelato layered extra high with decadent toppings, creams, crumbles and drizzles. The choices come as:

Overall, the Crimson Tavern left me with a very favorable impression, with dishes that aren’t afraid to push the bounds of every day fare found in Orlando, yet also quite tasty and fun to eat. I can imagine myself coming here often after work to share a few drinks with friends and bites, especially as there are so few good options in the Orlando International Airport/Lake Nona area. Hopefully they can continue to improve on their menu and will become a popular spot among not only those flying in and out of the airport, but with local Orlando denizens as well.

Inspired by both his English born grandmothers, at the age of 13, Anthony began cooking by their side in their kitchens in England. His “hands on” experience baking, pickling, making jams from fruits harvested from the garden created a passion for cooking that is still strong 30 years later.

Turning his passion into a career, Chef Hull studied in London, England before beginning his first culinary position at the Café Royale in London. To gain as much experience as possible Chef Hull then took a position as a pastry cook at the Sheraton Skyline Hotel, London under Executive Chef Uwe Zander

Seeking International experience, Chef Hull accepted a position in the Cayman Islands with the Hyatt Regency Resort and then The Westin Cauarina Beach Resort and Spa overseeing Casa Havana the only four star restaurant located on the island at the time.

A proven accomplished chef, he accepted an opportunity in Tampa, Florida and then in 2002 joined Marriott International.

Trained in classical French cooking. Chef Hull takes these basic fundamentals and techniques and applys them with a modern twist to showcase the ingredient in its purist form embracing the seasons and local artisans.