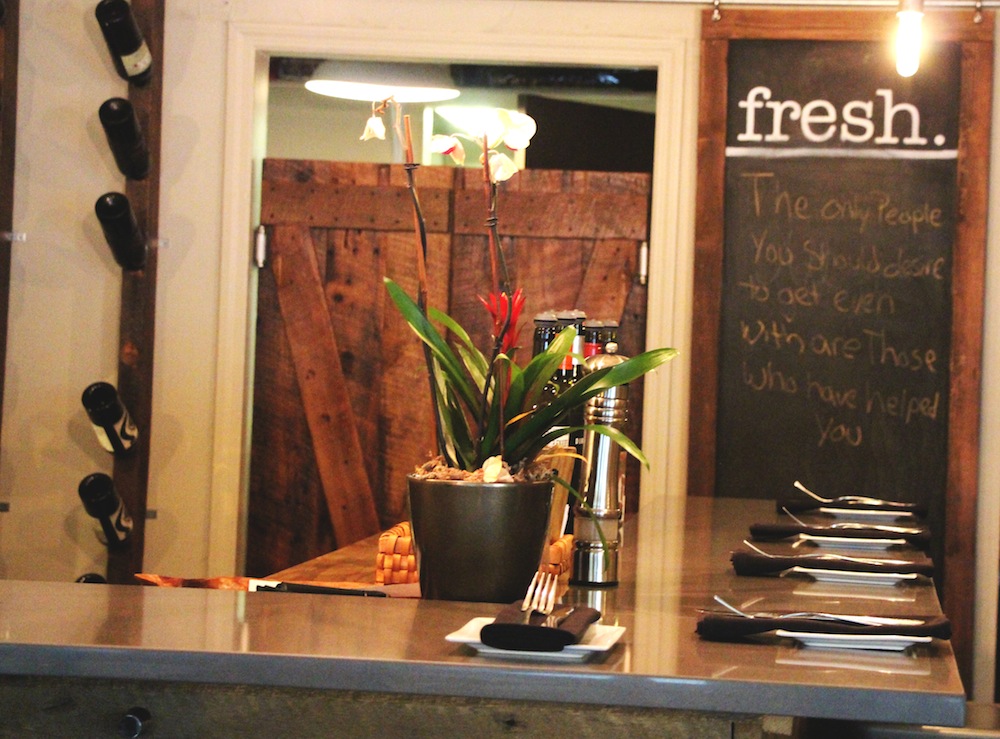 Park Ave is hands down the highest visited spot in Winter Park. However, there are still many hidden treasures to be found around this hotspot.

One day, I decided to explore Winter Park to see what more it had to offer. After ending up on Pennsylvania Avenue, I checked out a few of the local shops; a few being Riffle Paper Company and Pure Blends Apothecary and Spa. After a short lived shopping spree, I ran through the rain and ended up at Fresh Cafe.

Before you continue reading, please note I had absolutely no intention of coming here. However, the combination of rain and post-shopping fatigue brought on some serious soup cravings.  Upon entering, an EXTREMELY friendly staff welcomed me into the dim lit restaurant – the main source of light being the melancholy sun through the wide window. 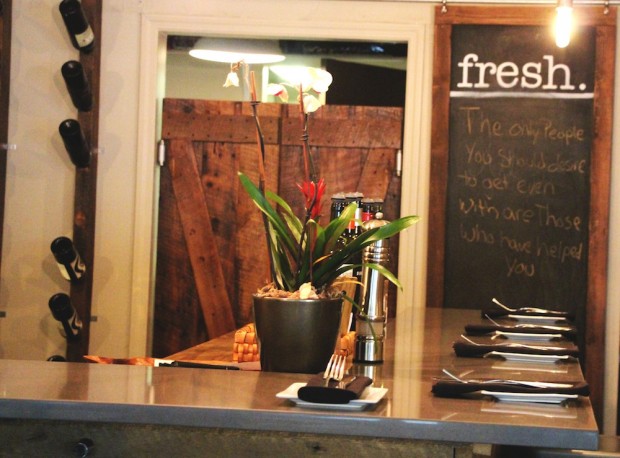 I sat down at a small wooden table and took in the surroundings. Beautiful wood tables. Posh designs. Calming atmosphere. The ambiance is indescribable and that’s a good thing because it’s one of the best places in Winter Park to go on a date. Fresh is known for its ethics. They are globally inspired yet locally sourced. Meaning, they use locally sourced organic ingredients.

The server tried his hardest to get my full attention but my eyes kept scanning the restaurant. Every detail. All the plants. He got really close to me until it was obvious that I couldn’t ignore him for much longer and asked me what I’d like to drink. My typical response is “Water,” and I said just that.

The waiter smiled and said “We have different infused waters,” pointing to various containers behind the counter. My eyes were instantly fixated on herbs floating in giant containers of water. I can’t remember all of the combinations, but I ended up choosing Rosemary instead of my second choice, Lavender.

My mood instantly changed for the better after taking a sip of the Rosemary infused water; it was fresh, earthy, and breathtaking. Every sip felt like a new breath of fresh air. A new server approached me and asked me how the water was.

I smiled and said “Yes..please” assuming he was inquiring if I wanted more. By this point, my mind was gone. I wasn’t listening to anyone. I felt like I was in a whole new world. It sounds cheesy but it’s true. The combination of the ambiance with the rosemary water was extremely euphoric. 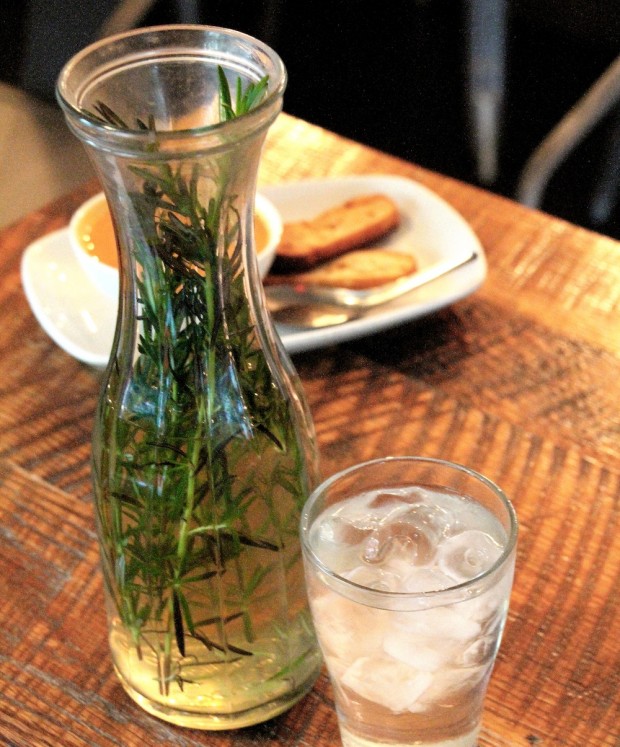 After getting my own bottle of Rosemary water, I looked over the menu and asked the server what he recommended. He pointed out the Tikka Masala Chickpea Soup, which sounded absolutely amazing since I’m from India and have felt homesick lately. The soup was very interesting – almost like a cross between curry and a creamy bisque. The texture was smooth and slightly thick. I asked the server how it was made. He said “We slow cook the chickpeas with the spices, puree it, and it continues to slow cook for hours.” The soup had notes of cardamom, cumin, tomato, coconut, and garlic. Overall, I’d give it an eight out of ten stars. The soup is delicious but it could use more spice. Maybe roasted red peppers or habanero? 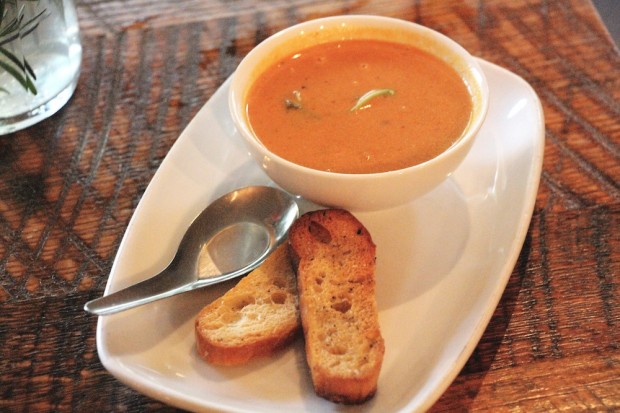 For my entree, I tried the Mrs. Saigon Salad, which had julienne Cabbage, Daikon, Cucumbers, Carrots, Scallions, Peanuts, Cilantro, mint, basil sesame-ginger dressing on a bed of black rice. I wasn’t exactly thrilled with the combination but I wasn’t disappointed with it either. The cold rice felt undercooked and the sauce was zesty its best but ended up being boring. The vegetables were fresh and crisp but the ginger dressing took away the original flavor. 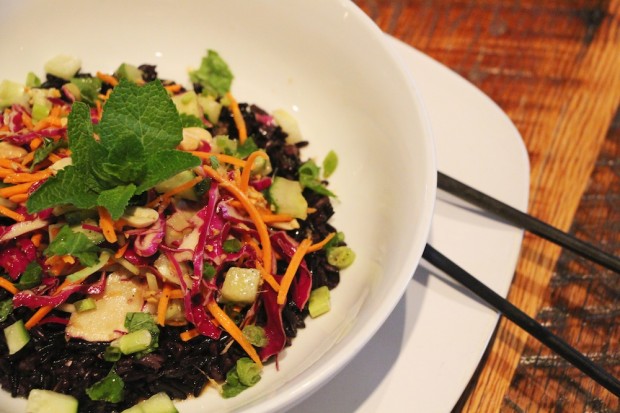 For dessert, I opted for the Bananas and Chocolate Bread Pudding, which was served with homemade whipped cream. Bread Pudding is not one of my favorite desserts. However, the combination of deep chocolate and creamy banana works well together. The dish is served warm and pairs beautifully with the cooly creaminess of the whipped cream. At first, I found the texture to be awkward until I felt a crunch. There were walnuts! Yum! The combination of rich flavors, creaminess, and crunchy texture set the bar for future bread puddings. Overall, I give the bread pudding a nine out of ten. My only issue with it was the flavor. A hint of cinnamon or peppermint would take the dish to a whole new level! 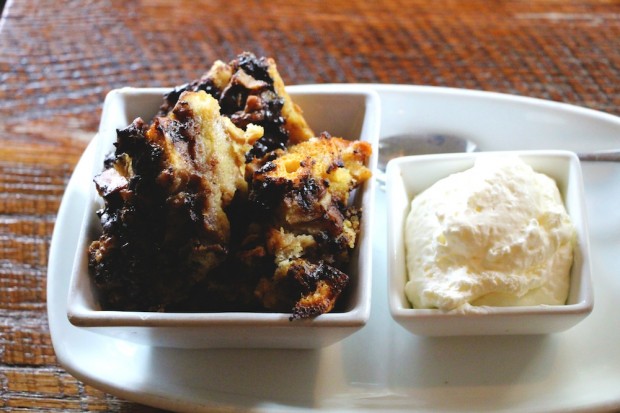 Fresh Cafe is an amazing restaurant. The customer service is superb and the cuisine is absolutely delicious. If I had to give it a rating, I’d give it a nine out of ten.