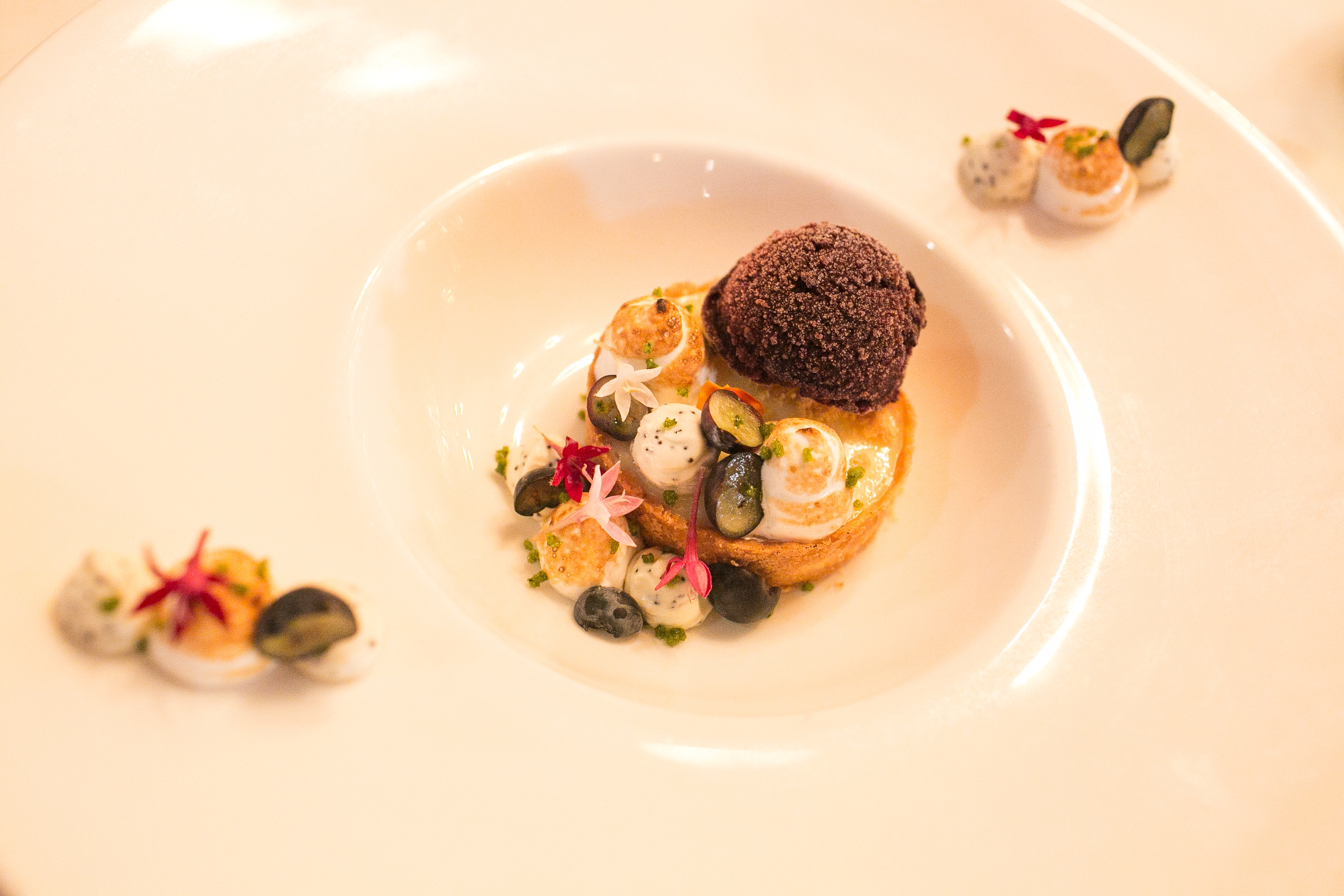 Urbain 40 American Brasserie and Lounge is a throwback to all the nostalgic swank and sophistication of the 1940s (hence the 40 in Urbain 40) Big Band era with a classic yet seasonally changing American and European continental menu.

Several months ago, after 9 years as executive chef of the award winning Flying Fish Cafe at Disney’s Boardwalk Resort, Chef Timothy Keating joined the Boulevard Restaurant Group as Director of Culinary Operations. The group owns and operates both Urbain 40 on Orlando’s Restaurant Row and Paradiso 37 at Disney Springs. 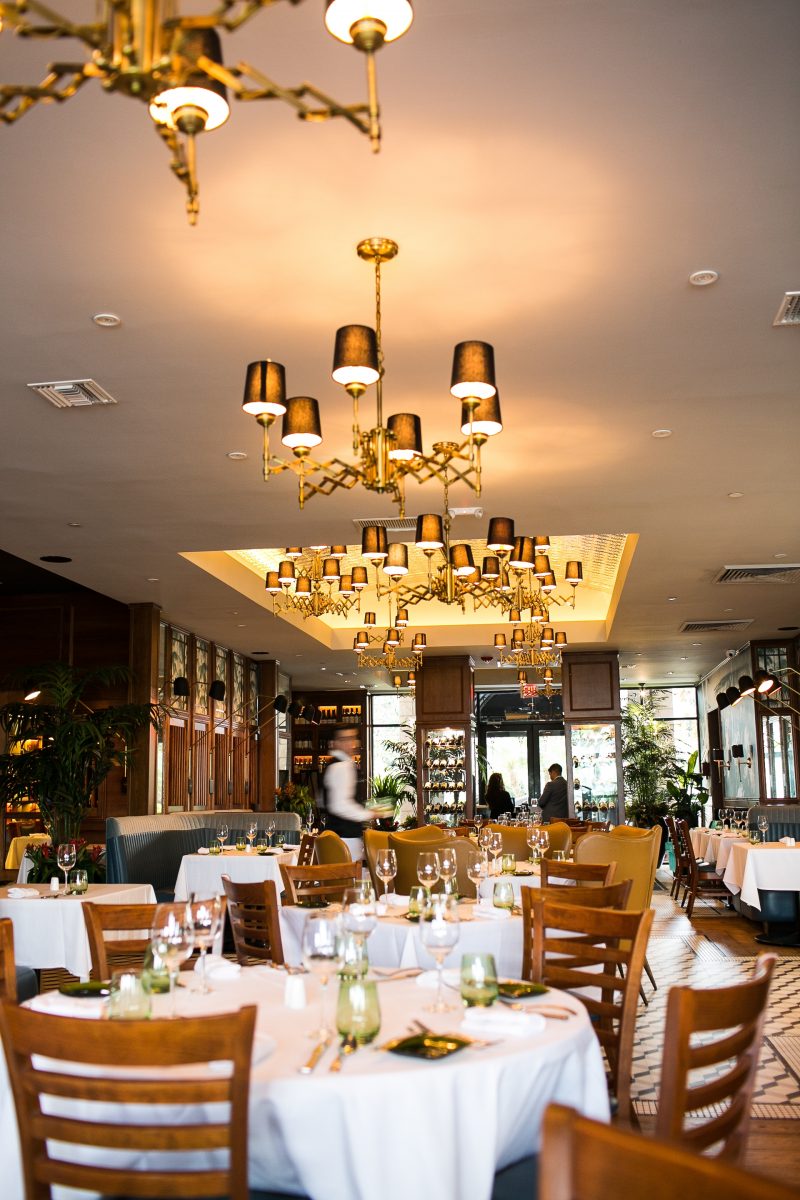 “Can you guess where these clams are from?,” Chef Tim Keating asks as I looked over longingly at the intoxicatingly aromatic cup of creamy New England clam chowder placed in front of me.

“Cedar Key – just north of Tampa! There’s lovely bits of pork belly, chopped leeks, vegetables, with the chopped clam in there, all in a roux of bacon and duck fat.” 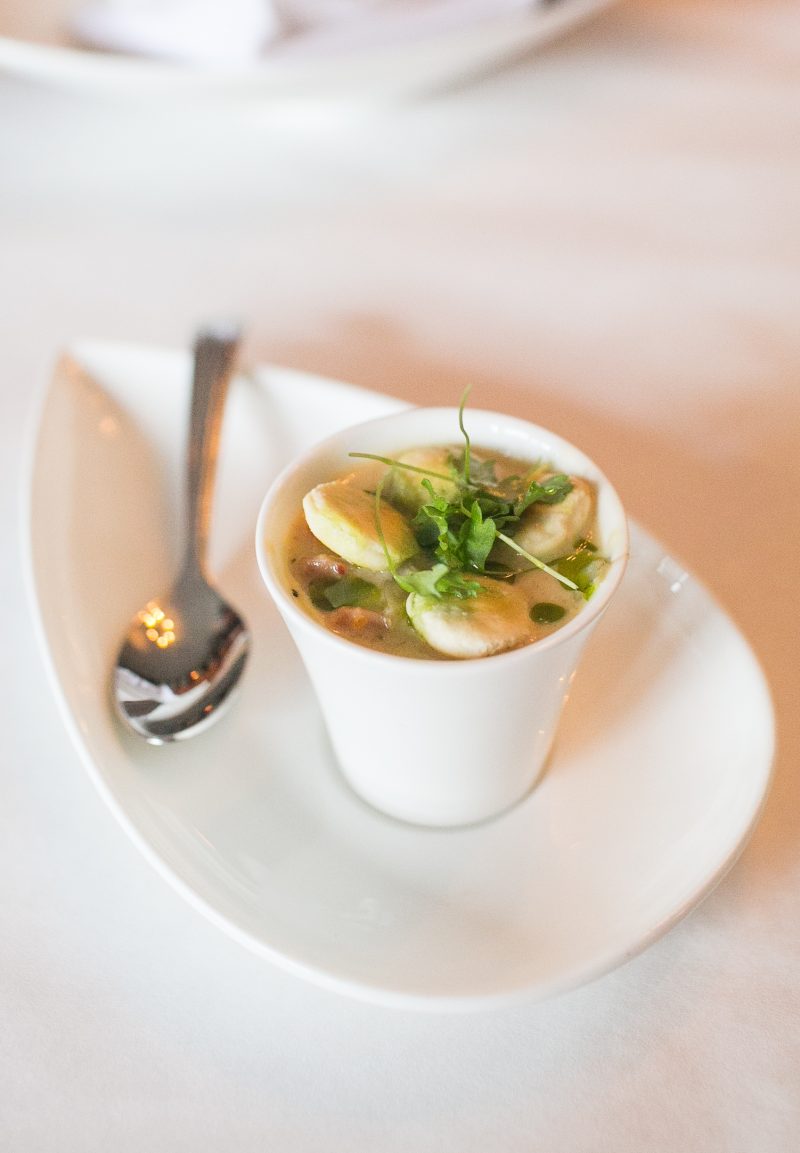 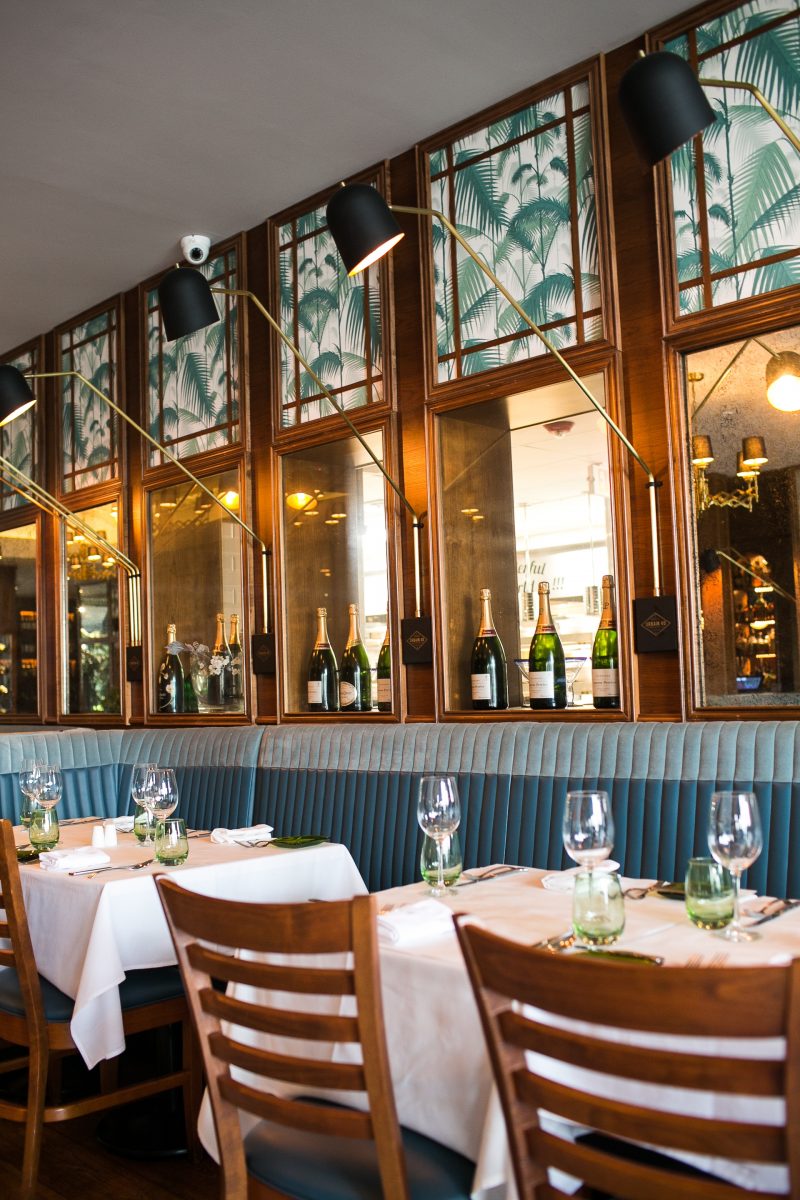 Among his many accolades, he was nominated four times for the prestigious James Beard Foundation Award for Best Chef-Southwest – in 2001, 2002, 2003 and 2004. 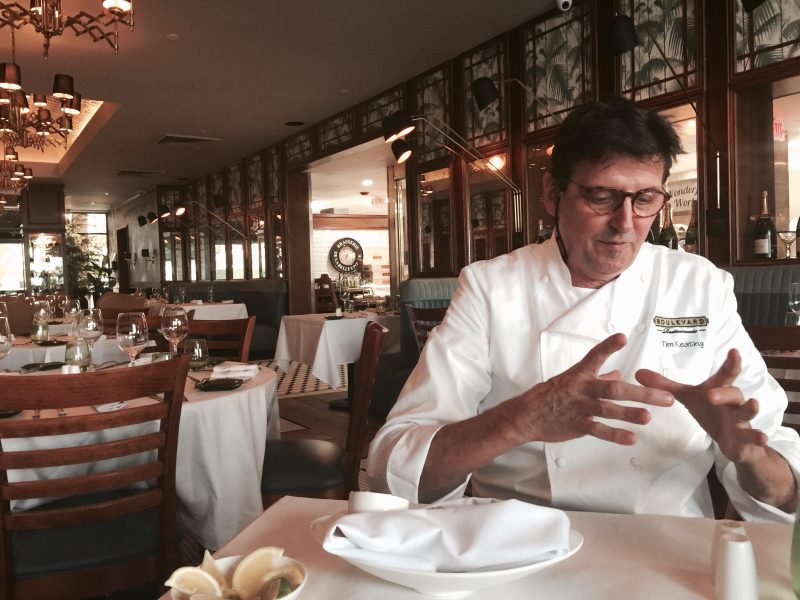 At six feet, eight inches – a former college basketball player – Chef Tim Keating towers in the kitchen, both as a figure and with his great intangible love and care for his dishes and the sourcing of his ingredients.

He loves to bring creativity into his work, using the freshest and highest quality ingredients from local farmers, fish mongers, and more.

At Urbain 40 – he is bringing more of the “American” into the “Brasserie” with new touches of Asian inspired dishes – like the coconut curry ginger yellowfin tuna filet – while maintaining the French favorites that guests have grown to love. Pieces and patchwork and cultures together making a great, big, delicious quilt called America.

We were recently invited to chat with Chef Tim Keating and preview some of the new dishes in season at Urbain 40 right now.

Some of my favorites of the evening included the Duck confit and duck sausage trofi di abruzzo Ligurian style pasta dumplings and the char-crusted Angus NY striploin. The char is a delightful medley of spices that give the steak an addicting, flame-kissed taste without being burnt. It’s black magic. 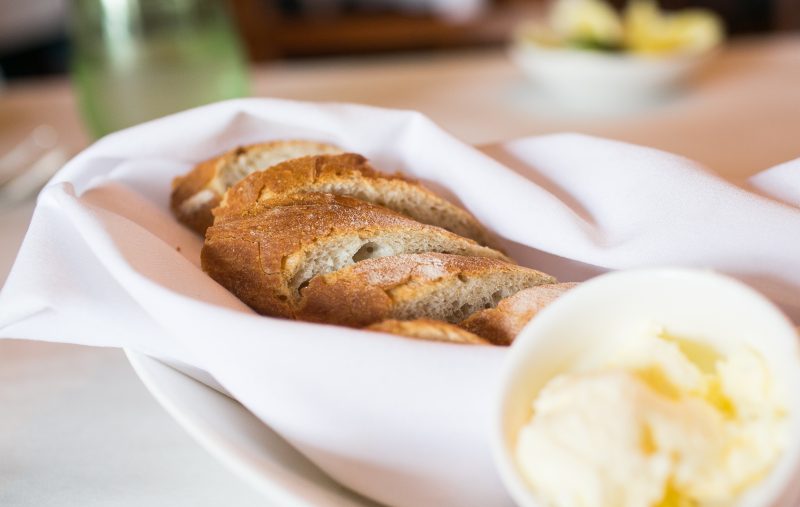 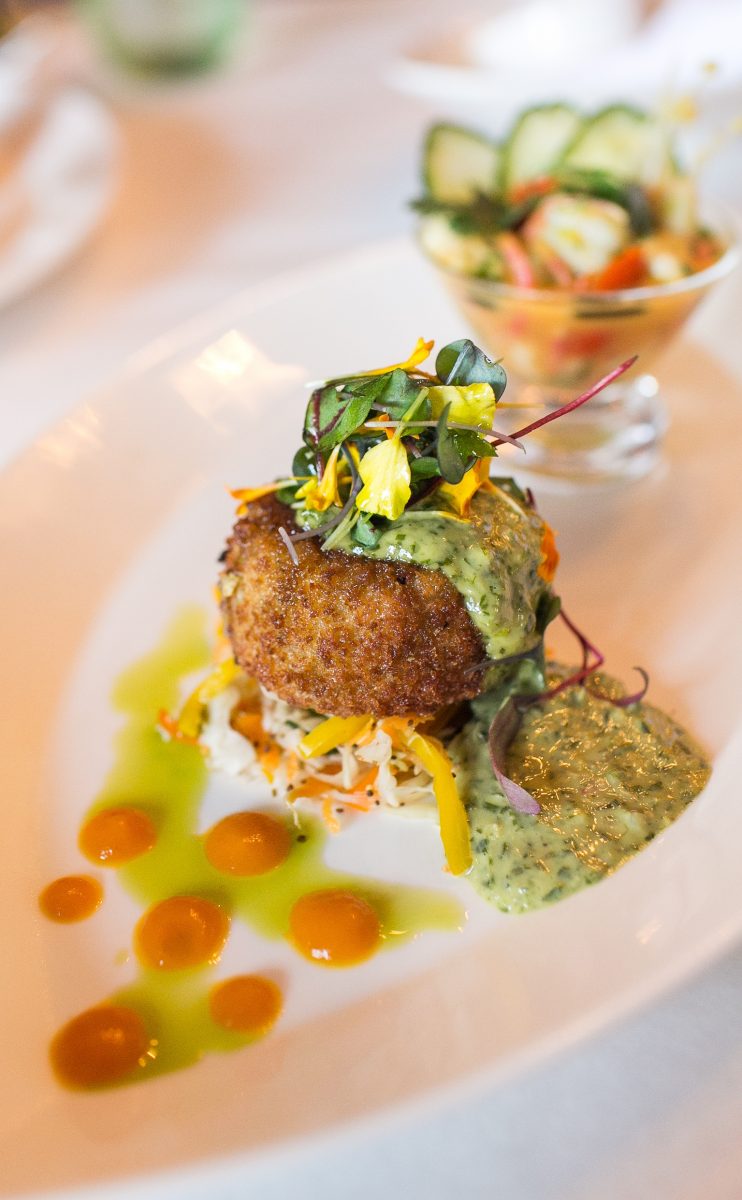 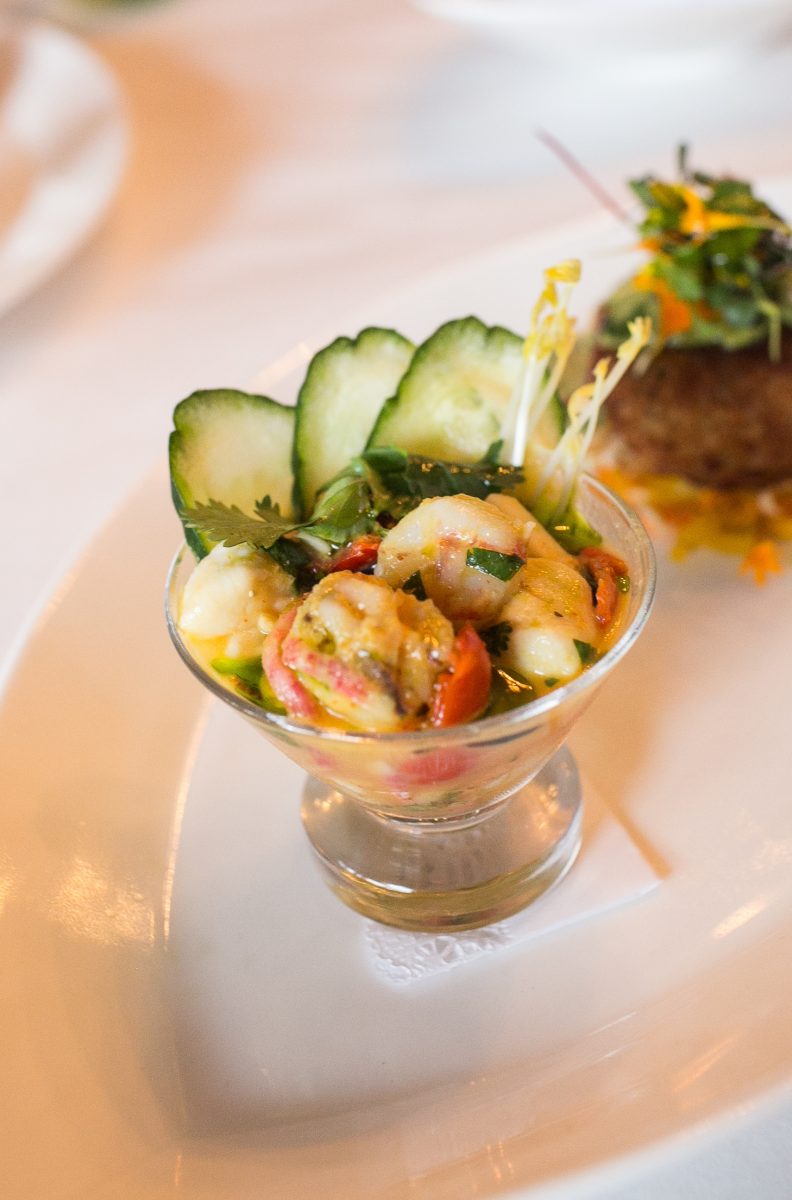 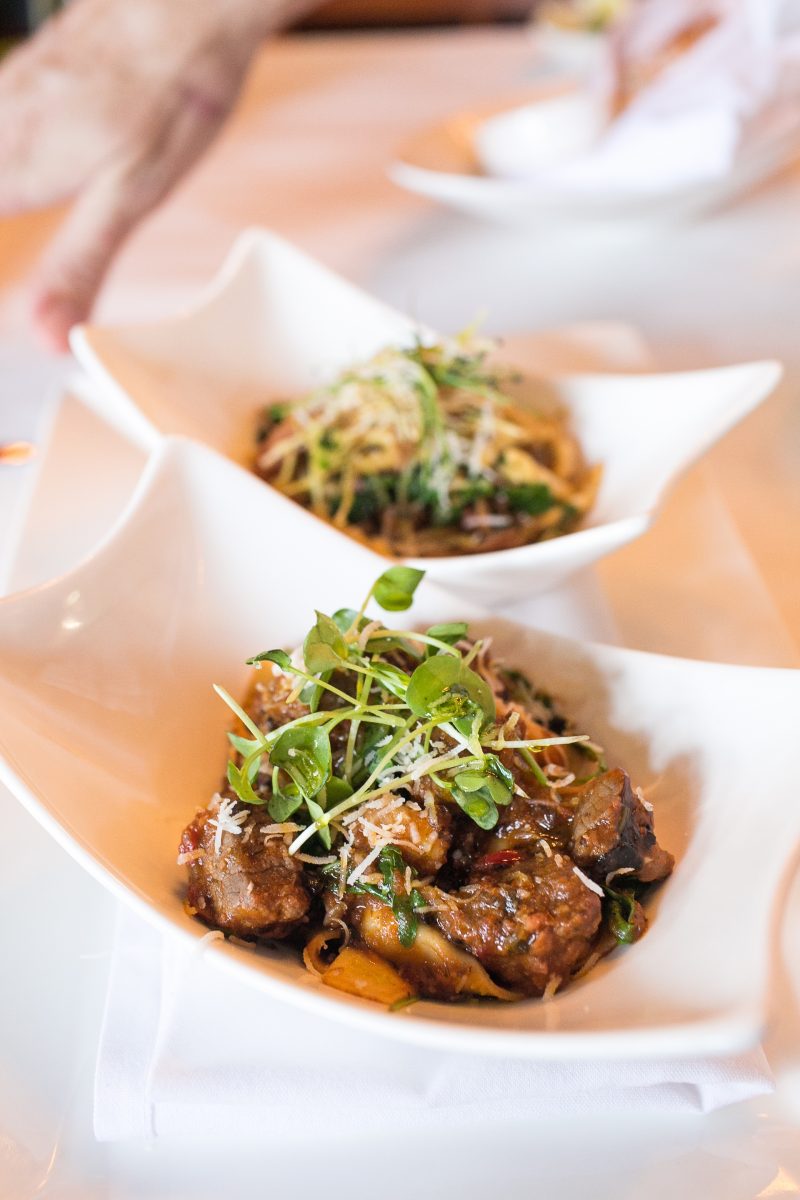 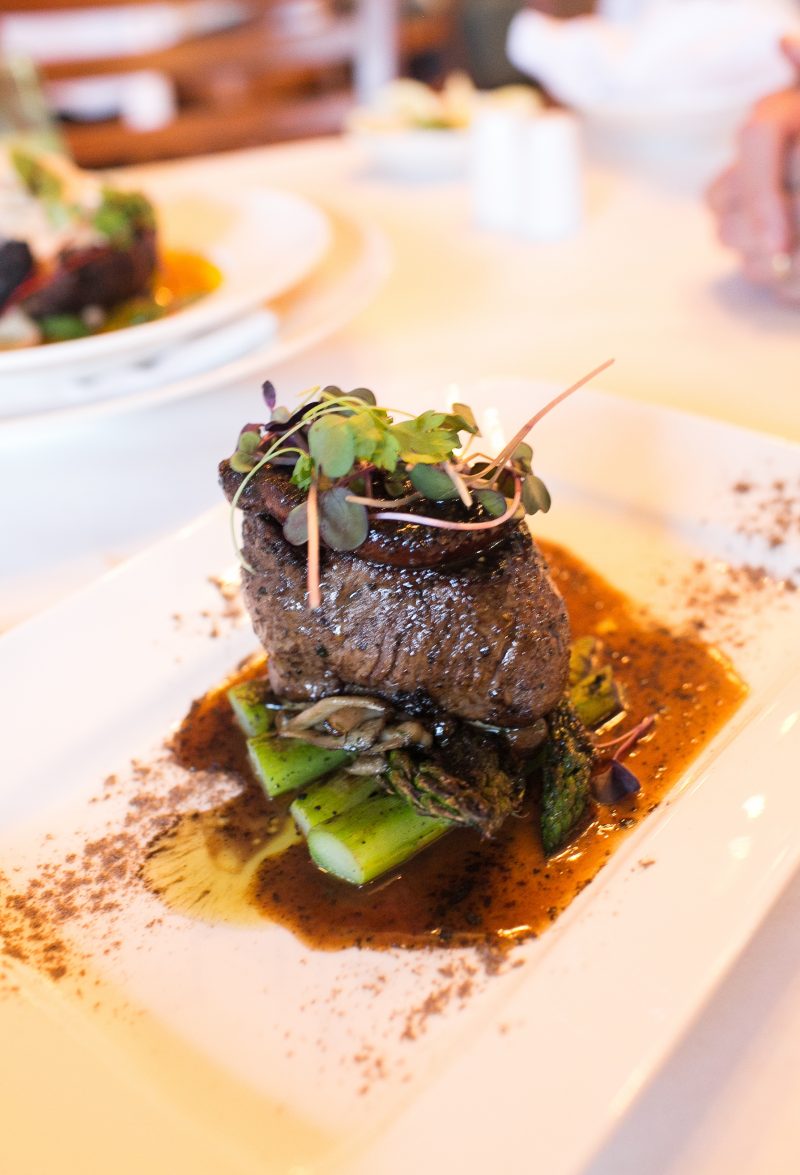 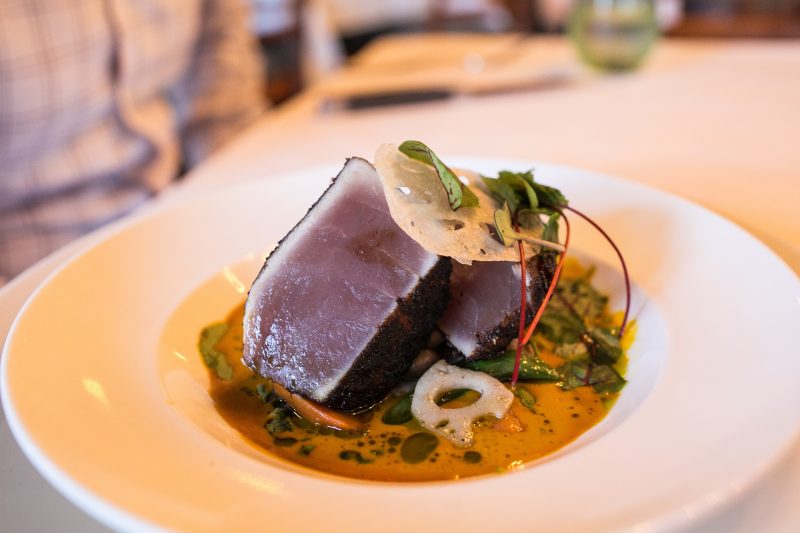 Ginger-Teriyaki Char-Crusted Yellowfin Tuna “Filet”
A massive cut of premium tuna steak, swimming in a delightful coconut-carrot-lemongrass curry butter emulsion, topped with lotus roots and mushrooms. I could still imagine slurping that curry up right now. The curry itself would be great with some noodles turned into a noodle soup with some duck confit – maybe next season! 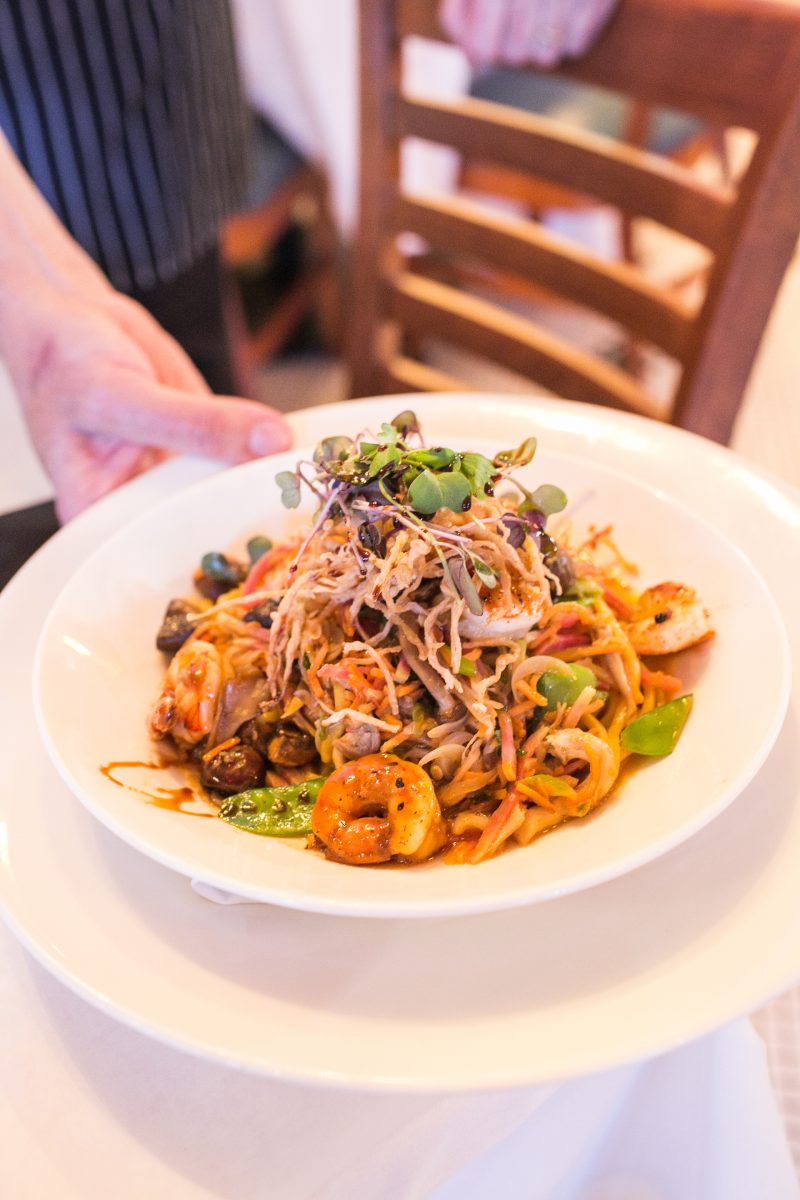 Urbain 40’s Pastry Chef Amanda McFall, a graduate of Le Cordon Bleu, may be one of the best, if not the best pastry chef in Orlando.

Her desserts are a work of art and it is almost feel a pity to eat them because they are so beautiful.

I say almost because they taste even more delicious than they look so I have no regrets.

The Tropical Sundae Deluxe, conjuring memories of the Caribbean with rum soaked angel food cake and toasted coconut gelato and spiced pineapple, may well be THE Dessert of the Summer. 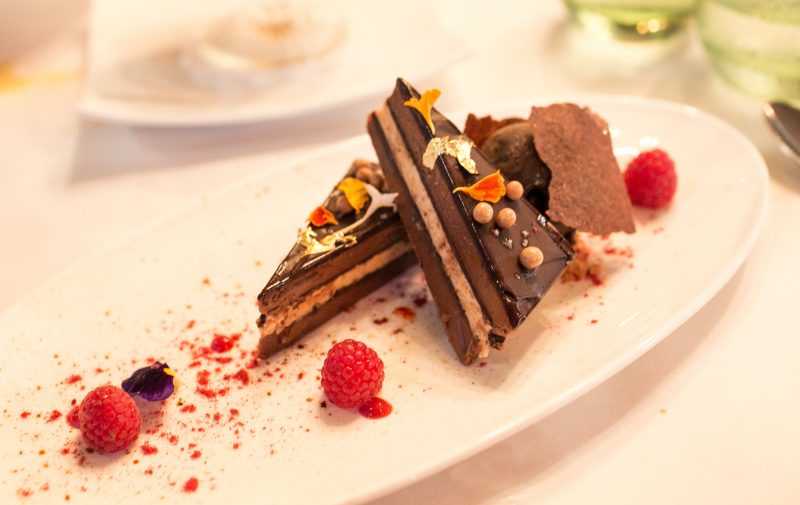 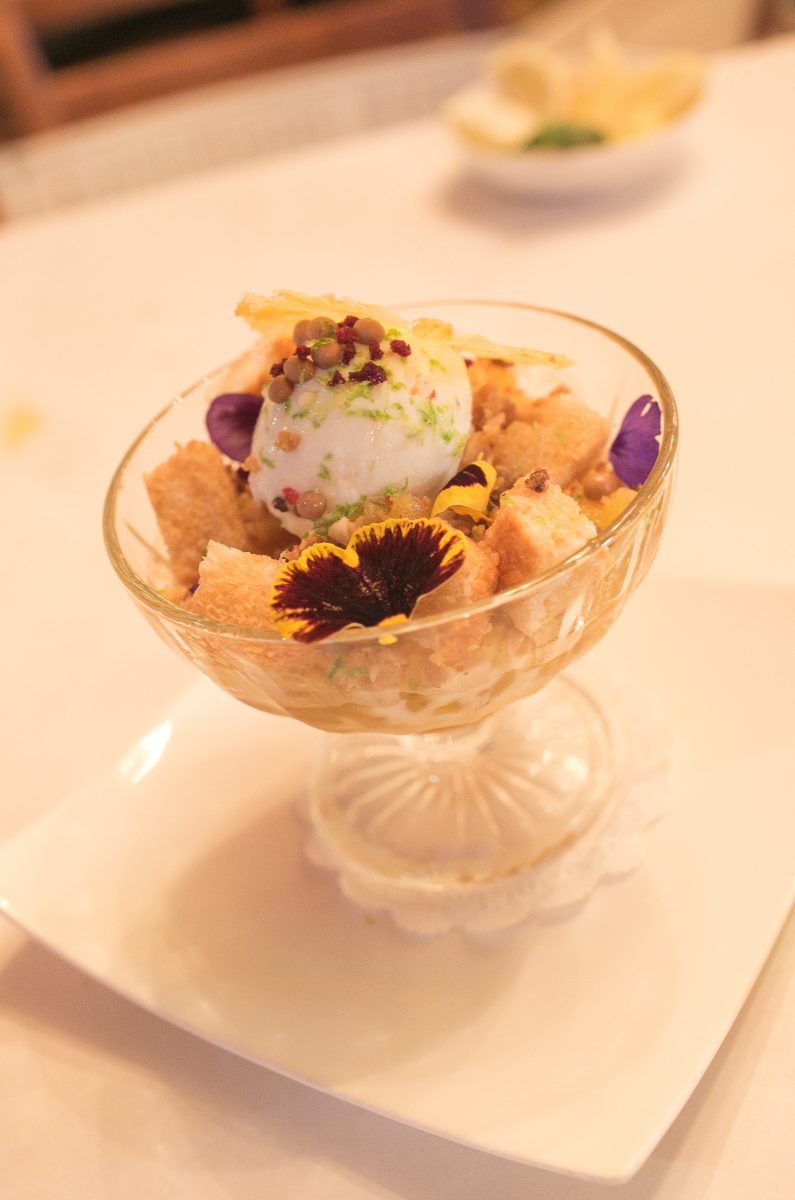 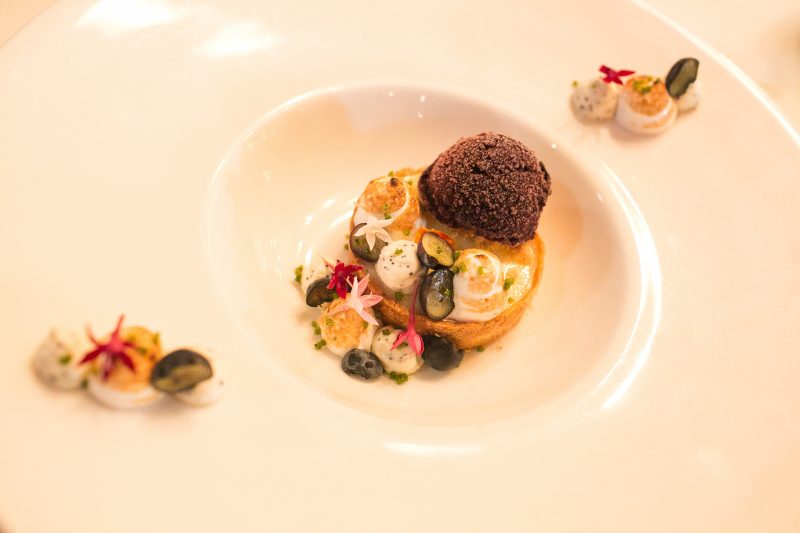 There is a sense of playfulness in the creativity of all of Chef Keating’s dishes at Urbain 40 that is genuinely refreshing.

Urbain 40 since its opening had been one of my favorite restaurants in Orlando – those sizzling mussels are the stuff of dreams even still today – and not only is it in skillfully good hands with Chef Tim Keating, but the changes to the menu are refreshing and have elevated the restaurant higher. 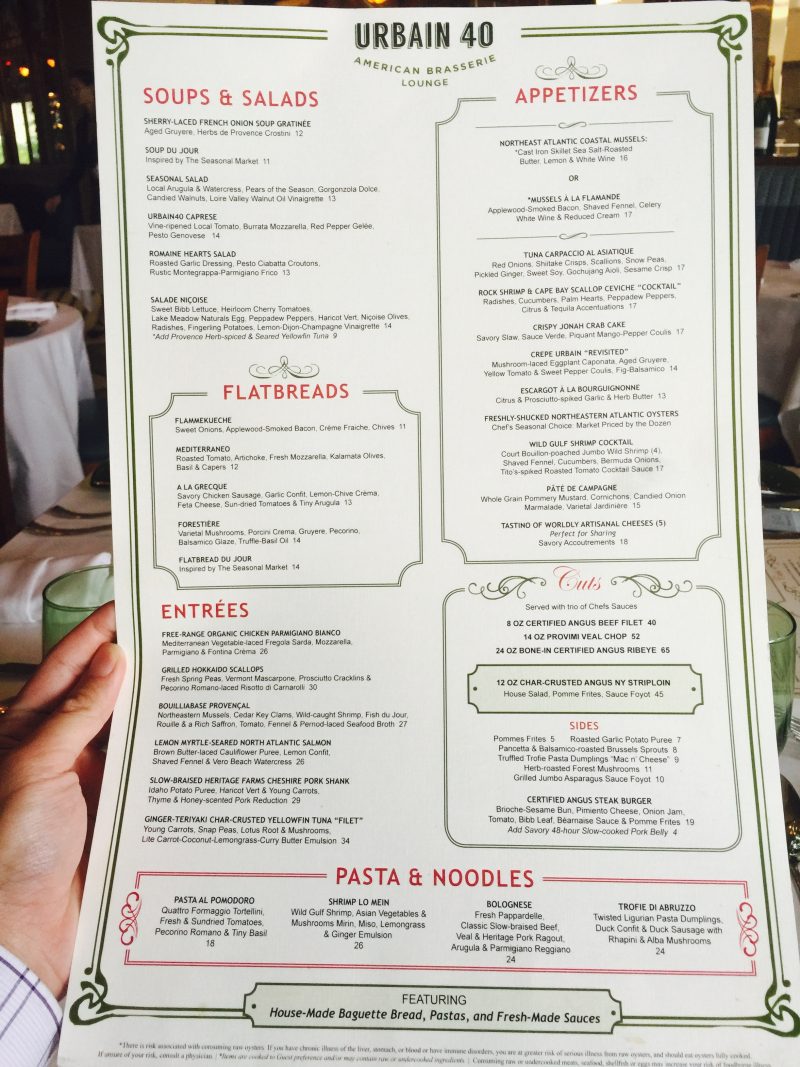 Photos by So May Ly Photography