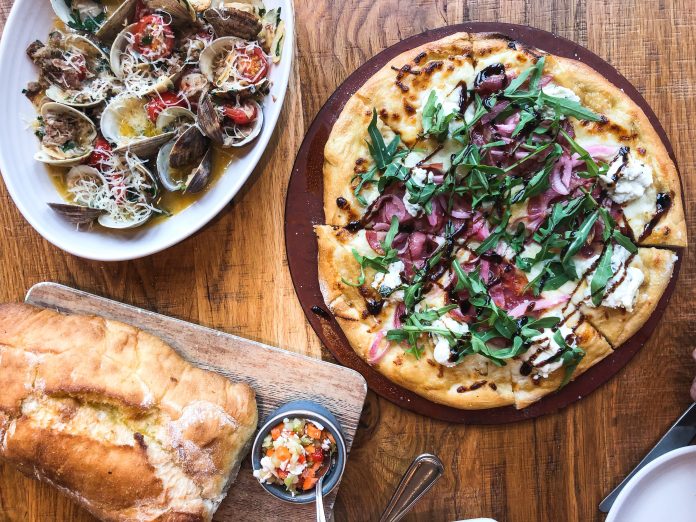 The kitchen is at the heart of Terralina Crafted Italian and the wood-burning oven fires a selection of hand tossed pizzas, calzones and fresh vegetable along with dishes from the hearth including chicken parmesan and seafood cannelloni prepared with housemade pasta. 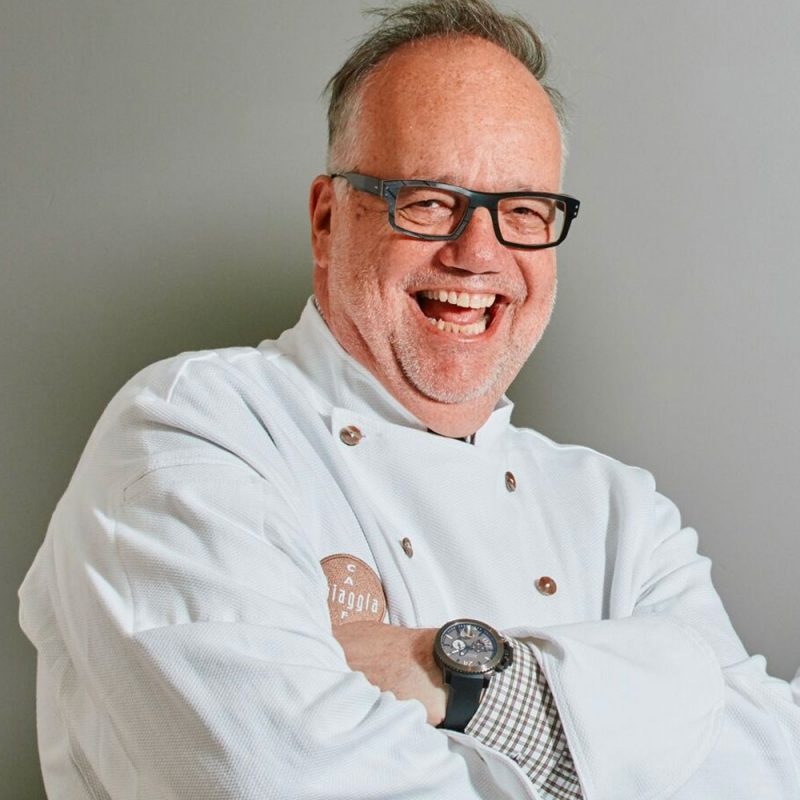 In addition to his role as chef-partner at Michelin Star restaurant Spiaggia, Mantuano is a recipient of the James Beard Foundation Award for Best Chef: Midwest and The Chicago Tribune’s Good Eating Award, which honors achievement in the food and restaurant industry. Outside of the kitchen, Mantuano is often recognized for his participation on season two of Bravo’s “Top Chef Masters.” 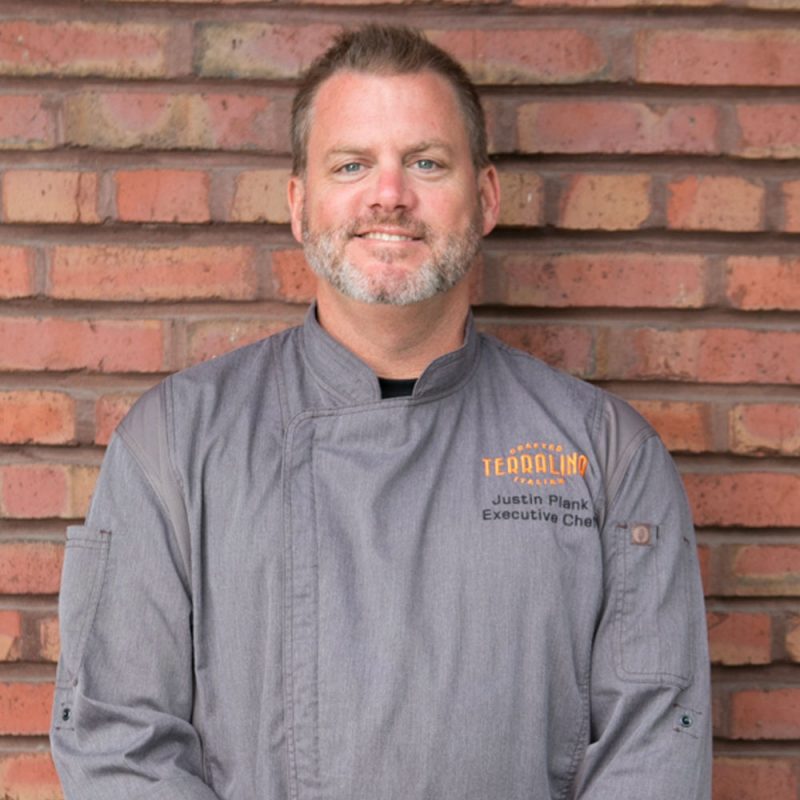 Since he was six-years old, Executive Chef Justin Plank has been preparing dishes for the masses. From helping his mother cook meals for his eight brothers and sisters to feeding the guests who come to visit Terralina Crafted Italian at Disney Springs, Plank knows what it takes to create a dish that will appeal to a variety of tastes.

Plank graduated at the top of his class from the Florida Culinary Institute and won the opportunity to travel to Zurich, Switzerland, for his externship. While there, he earned the honor of becoming the chef of house. Since then, Plank has run different kitchens from Wolfgang Grand Cafe in Seattle, WA, to LeGrand’s Alaskan Prime Seafood & Steaks in Myrtle Beach, SC, to Park Plaza Gardens in Winter Park, FL. During his 2002 to 2007 tenure at at Park Plaza Gardens, Plank established the restaurant as an Orlando hotspot and was voted one of Central Florida’s top 10 chefs two years in a row. 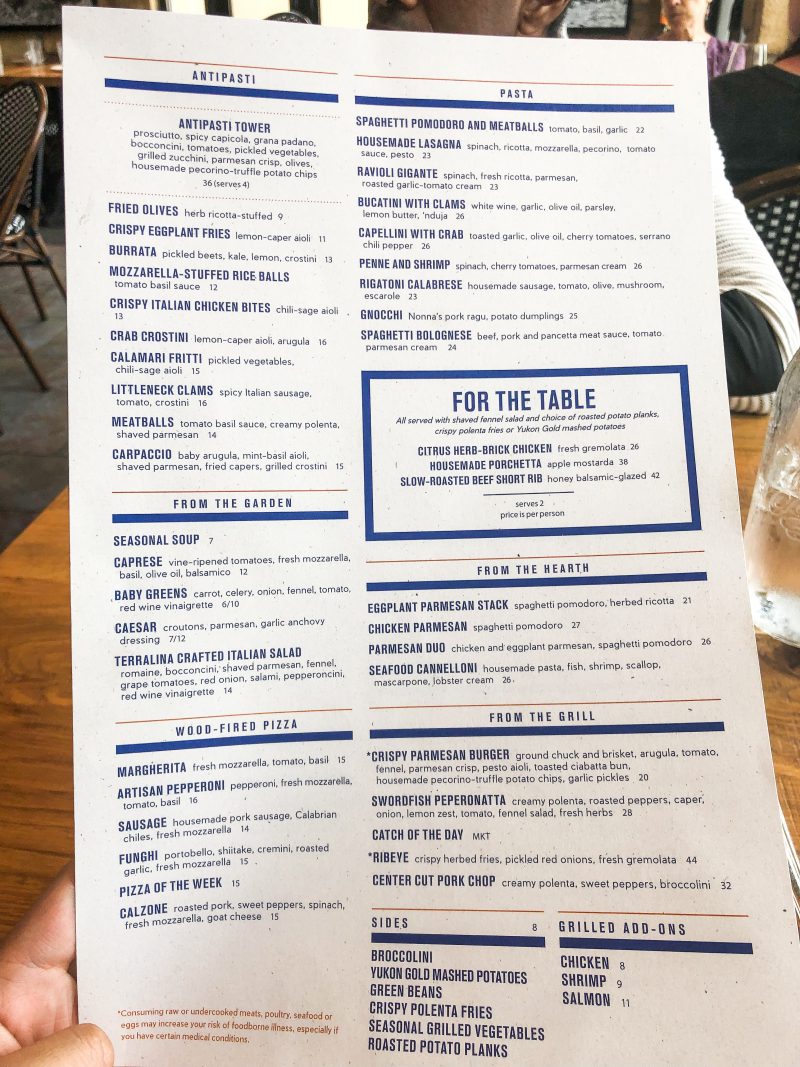 On the changes since Portabello, Chef Plank tells us, “Terralina took some of the standouts of Portobello and then revamped the rest into some of the best “home cooked” dishes ever. Terralina is leaps and bounds over Portobello, but I’m a little biased.” 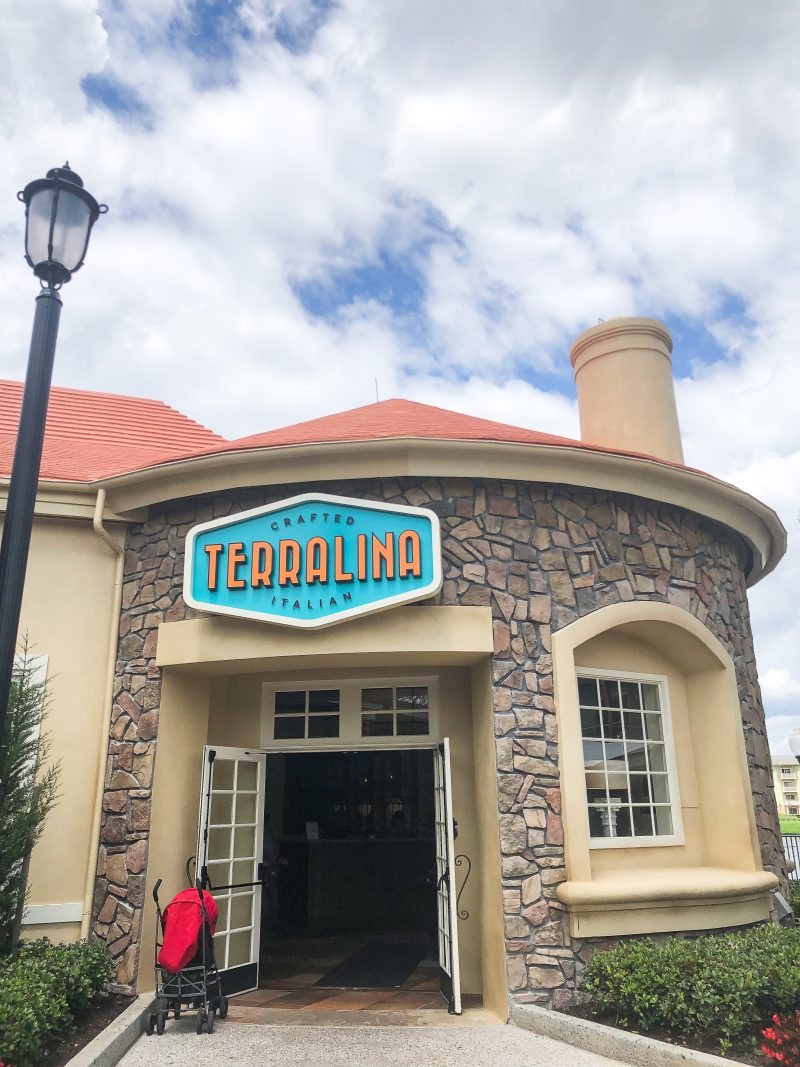 For starters, we recommend the little neck clams, a delightful buttery dish full of little neck clams and spicy Italian sausage bites served with crostini bread that goes perfect with the butter and also the Mozzarella stuffed rice balls – crispy on the outside, yet oozing with cheesy rice inside. 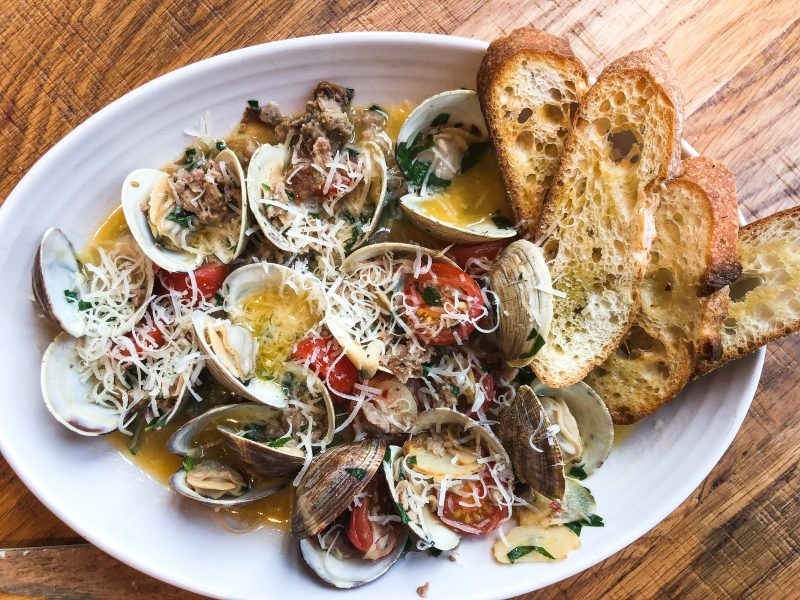 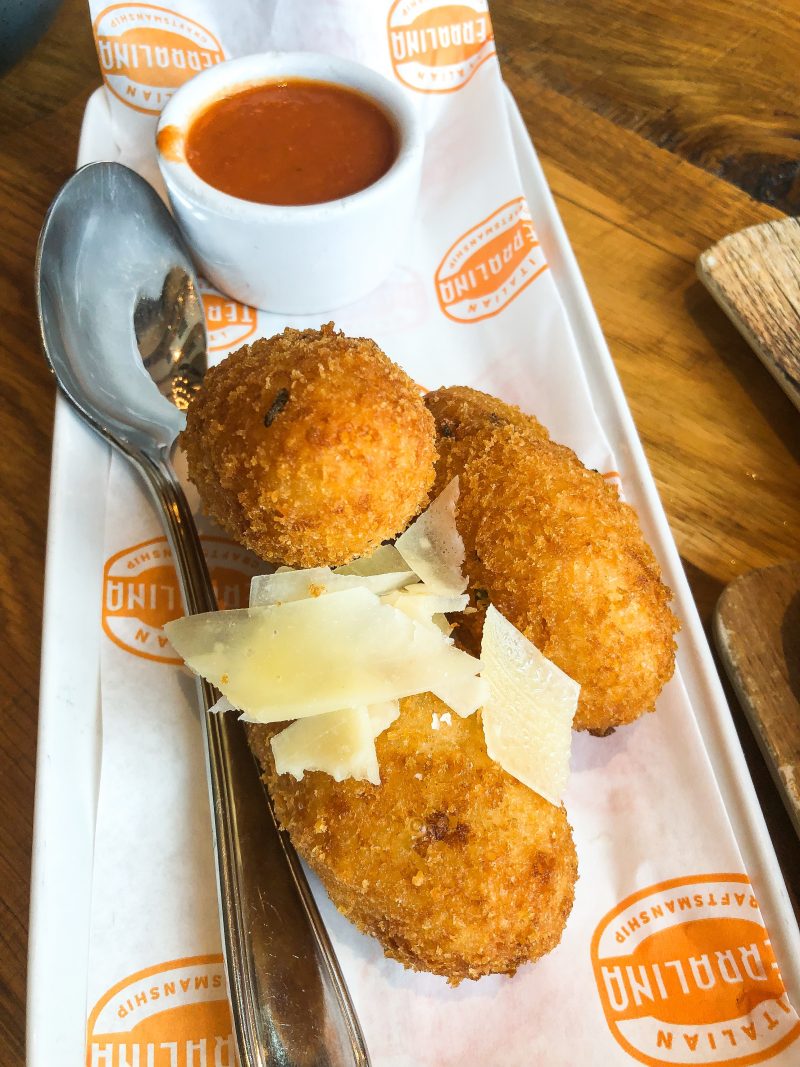 Share one of the many pizzas available from their wood-burning oven such as the funghi pizza topped with portobello, shiitake, cremini, roasted garlic, and fresh Mozzarella cheese. 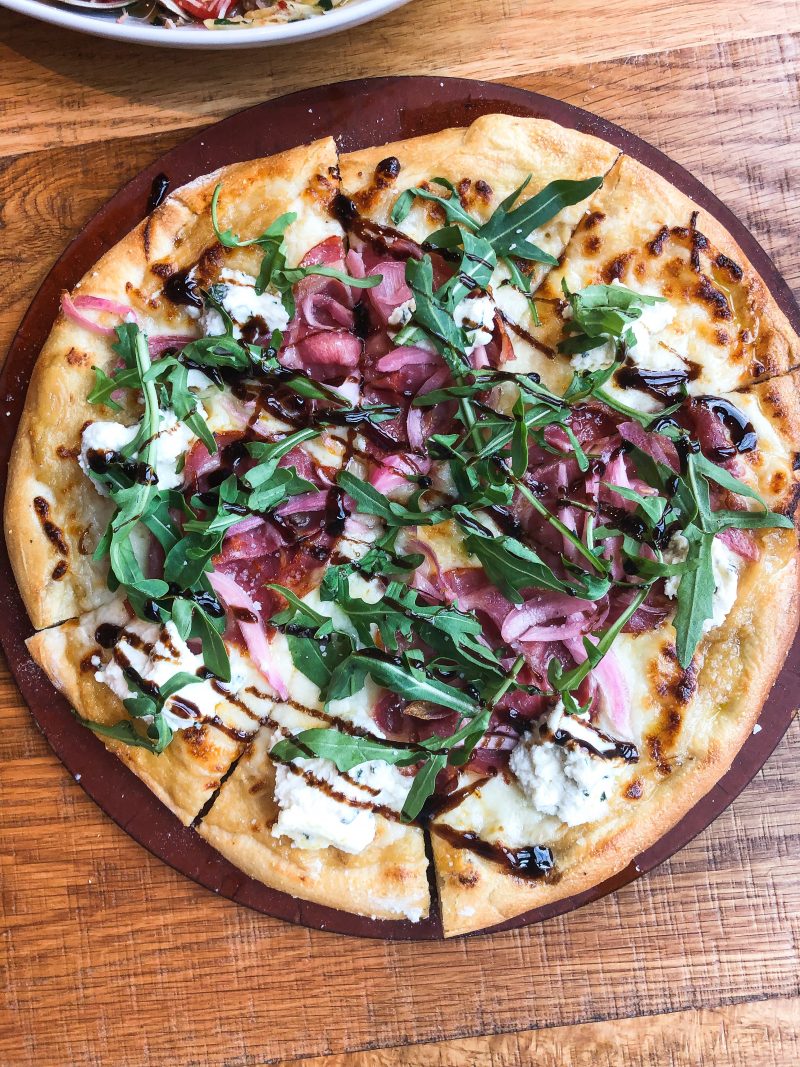 Seafood Canneloni is one of the signature Italian dishes here at Terralina, and one of the dishes that Chef Plank made for Chef Tony Mantuano that helped him win the job as executive chef of Terralina. It’s a delicate pasta dish folded with mascarpone cheeses and a mixture of seafood including fish, shrimp, scallop, and a lobster cream sauce. 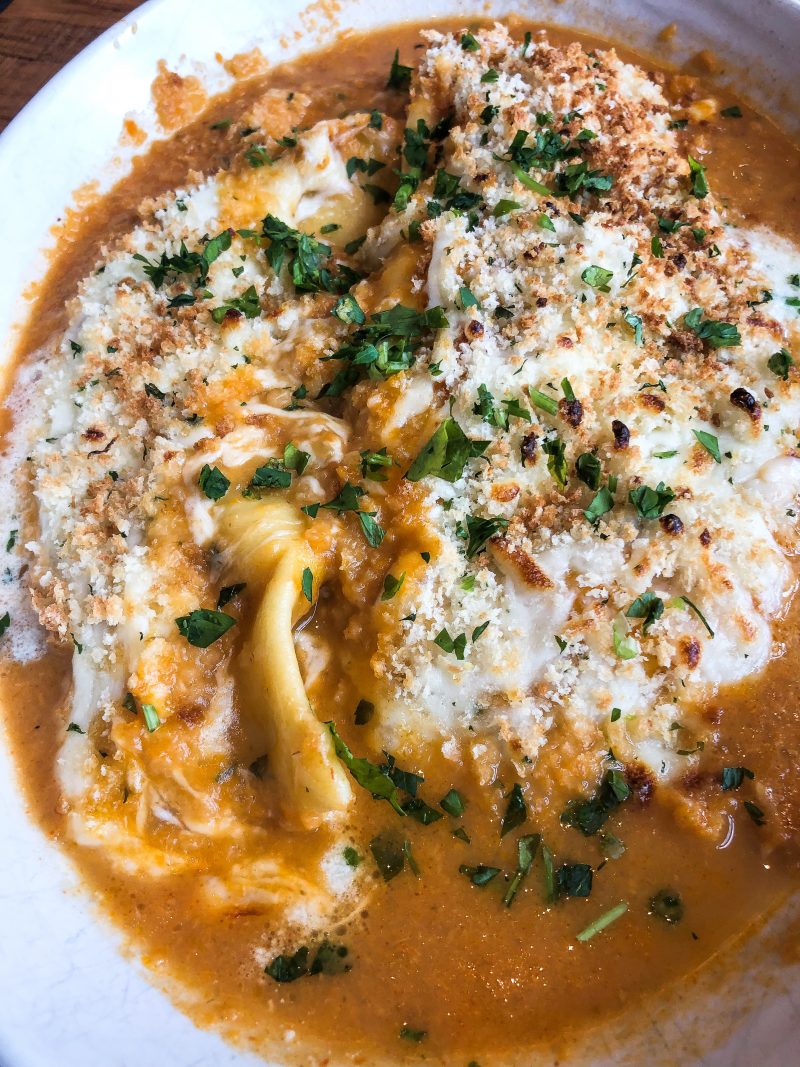 For dessert, the lemon panna cotta with candied thyme and the tri-color Gelato Sunday with pistachio, chocolate, and vanilla gelato are crowd pleasers for those looking for that sweet ending. 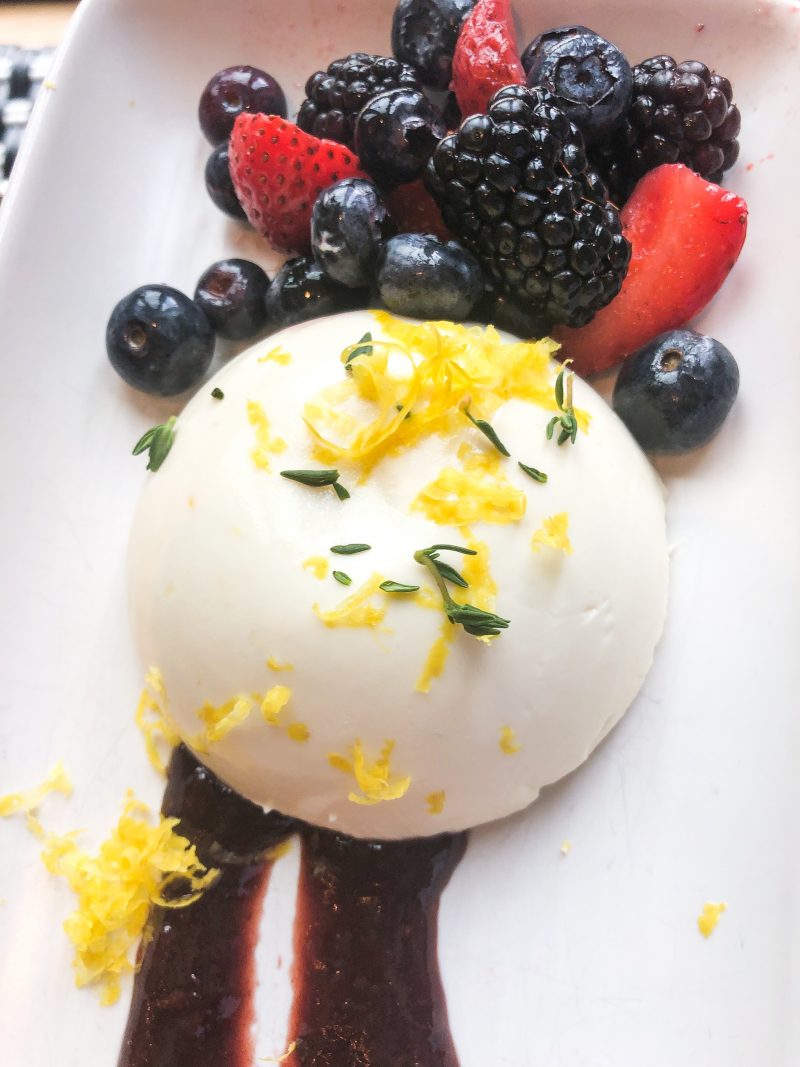 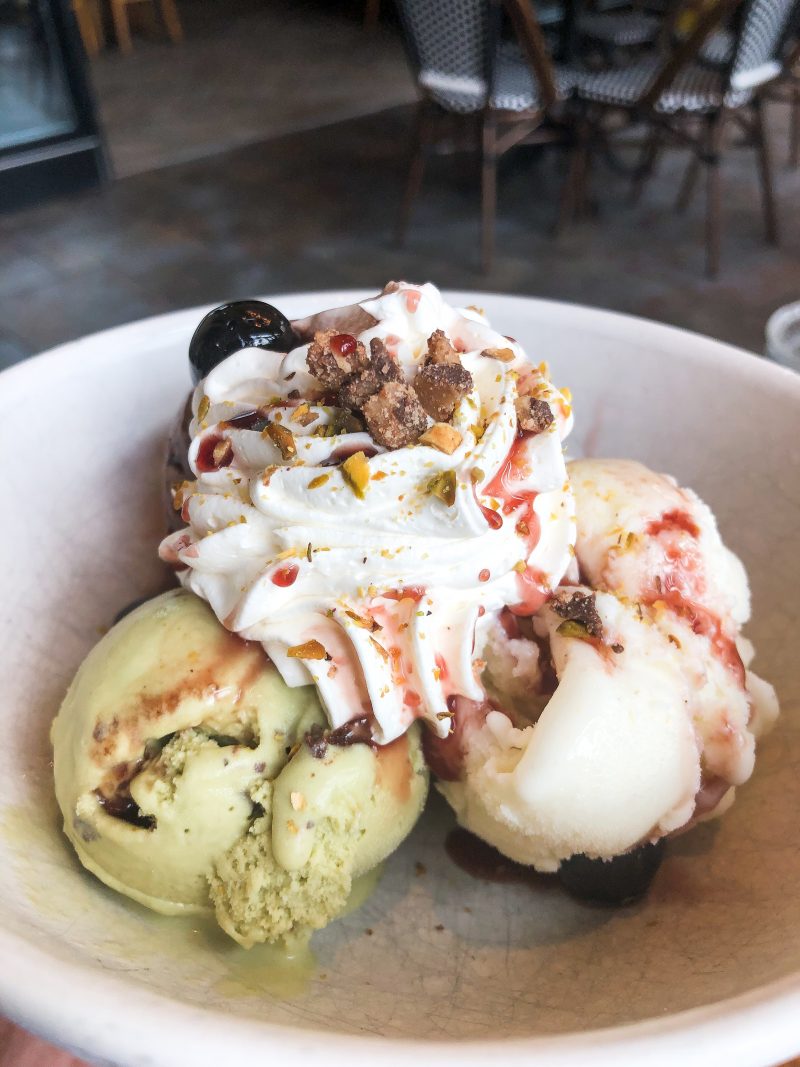 TastyChomps: What are some of the greatest influences in your life in becoming a chef?

Chef Justin Plank: I’m the last of nine children and every day my mother would make the most incredible meals and I would get to help, so she was a huge influence! She did an amazing leg of lamb on special occasions, spaghetti and meatballs, and bourbon and soy marinated London broil.

What are some of your favorite food memories growing up?

We didn’t go out to eat a lot but I remember having my first oyster at Lee and Rick’s Oyster Bar when I was just 5 years old. Also spaghetti and meatballs at home were my favorite.

What are some personal touches you have made on the new Terralina menu?

We spent a lot of time perfecting the pizza dough and the marinara with some of the best ingredients available to us. One of my first dishes I cooked for Tony during my first interview made it to the menu.

How does working at Terralina compare to restaurants you’ve worked at in the past?

There really is no comparison, it’s my dream job to work under Tony Mantuano, he is the most supportive positive chef I have worked with. He allows me creativity all while being a great mentor. It’s amazing how much knowledge and culinary wisdom that he gives freely. His positive energy is one of the greatest things that he brings when visiting.

What are some of the most popular dishes right now at Terralina?

The house made seafood cannelloni and our lasagna are very popular, however the chicken parmesan and the eggplant parmesan are fan favorites. 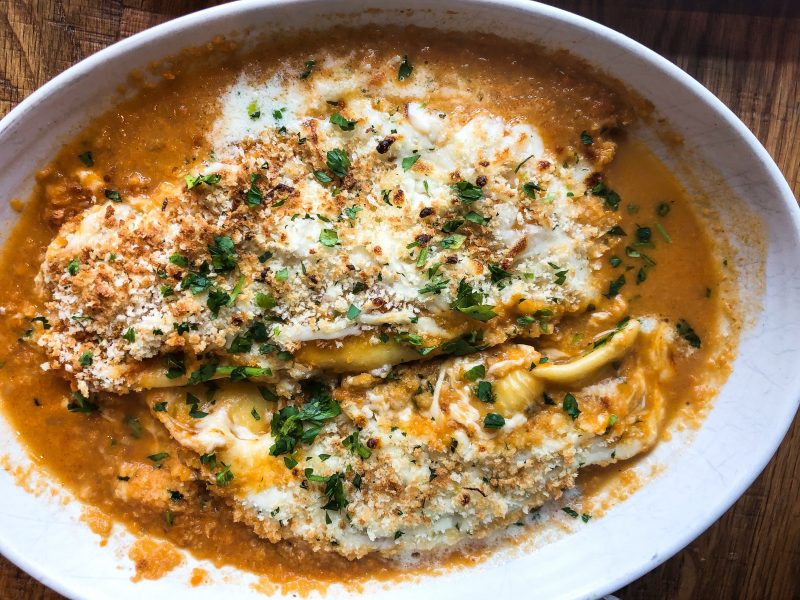 Tell us all about the seafood canneloni and the story behind it?

Tony asked me what I thought of adding a seafood pasta and after days of experimenting with different dishes the cannelloni was the one. It was the first dish Tony tried while visiting and I will never forget him saying, “This was the best thing I’ve eaten in weeks!”

What is something people can find here at Terralina and no where else?

What are some of your favorite dishes on the menu that people should try?

The seafood cannelloni with lobster cream and the bucatini with clams are my top 2 favorites but I recommend everything.

What is the secret to cooking great Italian dishes?

Keep it simple! Tony says that the best ingredient is the one that you leave out.

What are some ingredients that you love working with right now?

Getting fresh seafood daily and local ingredients when possible are two of my favorite things. I also enjoy working with my team making fresh pasta every chance I get.

Where do you like to go eat when you aren’t working?

My kids and I cook at home pretty much every chance I get but I do love a good poke bowl at Lemon Shark Poke (in Dr. Phillips) for lunch with my kids Iain and Sophie.

What do you make when you have no time or when it is really late at night – some thing that just hits home?

Simple pasta carbonara with good parmesan and cracked black pepper served with a simple salad of baby spinach and arugula dressed with olive oil and balsamico.

Any upcoming plans for Terralina this year?

We have some great seasonal menu changes coming and based on our guest feedback we plan to do more wine dinners and cooking classes in the new year. 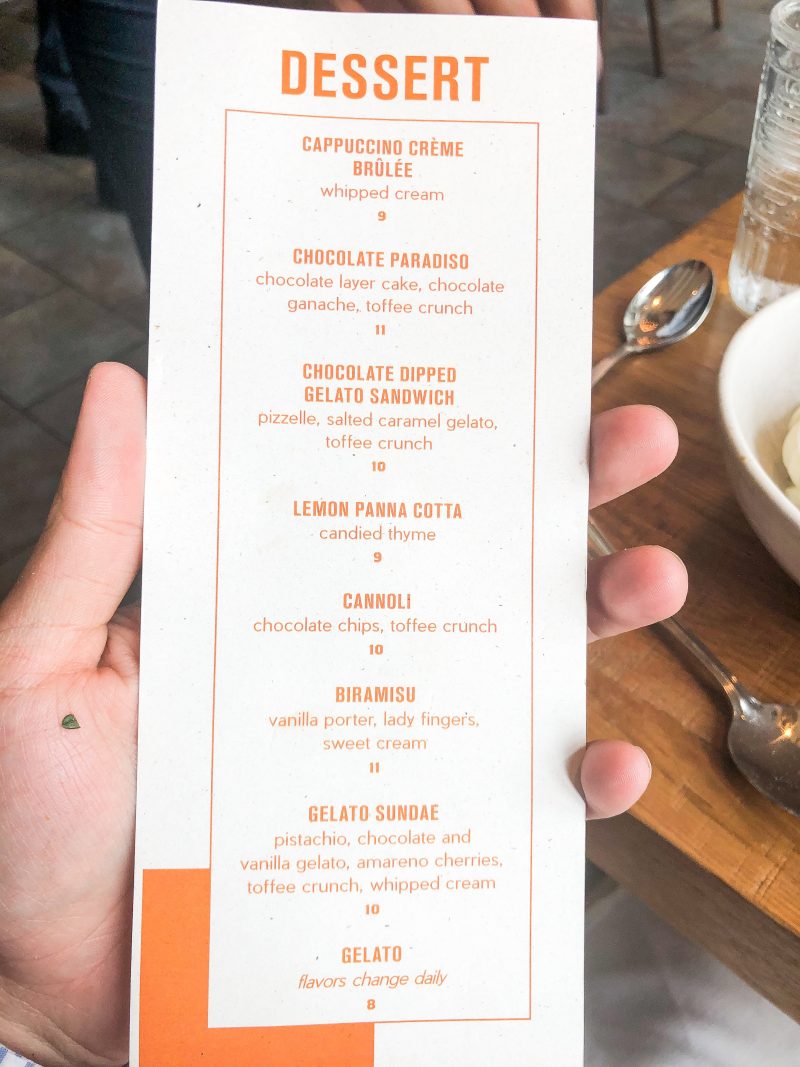 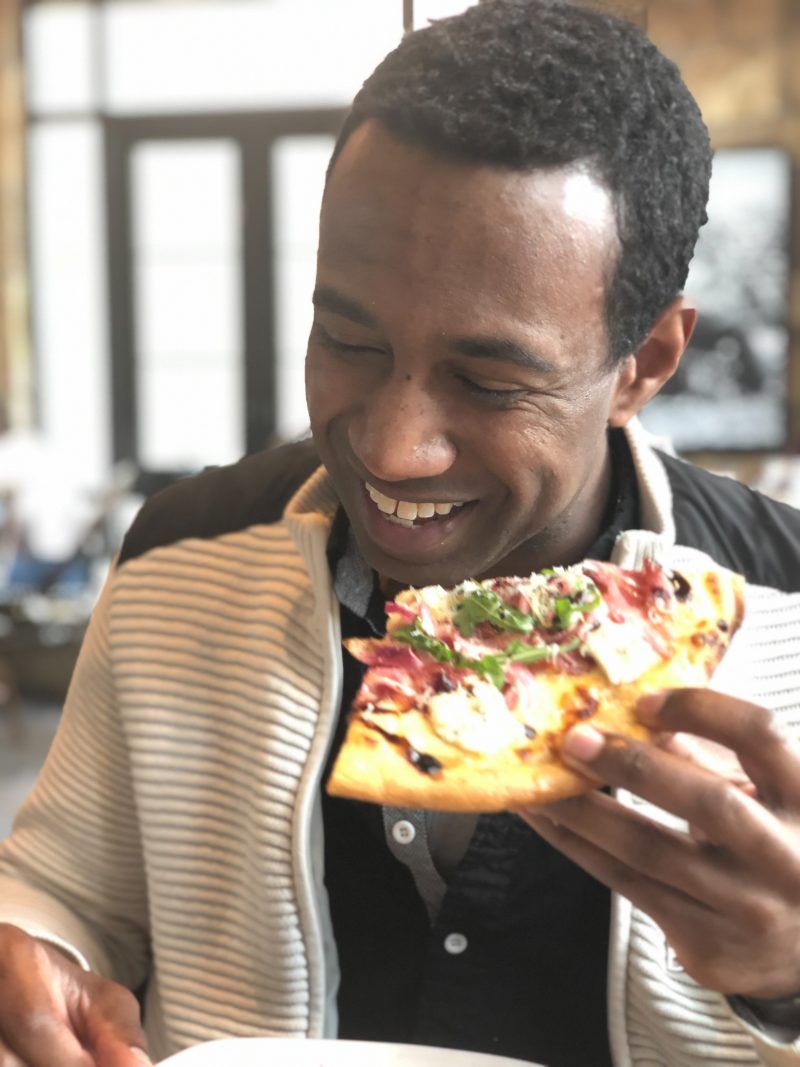 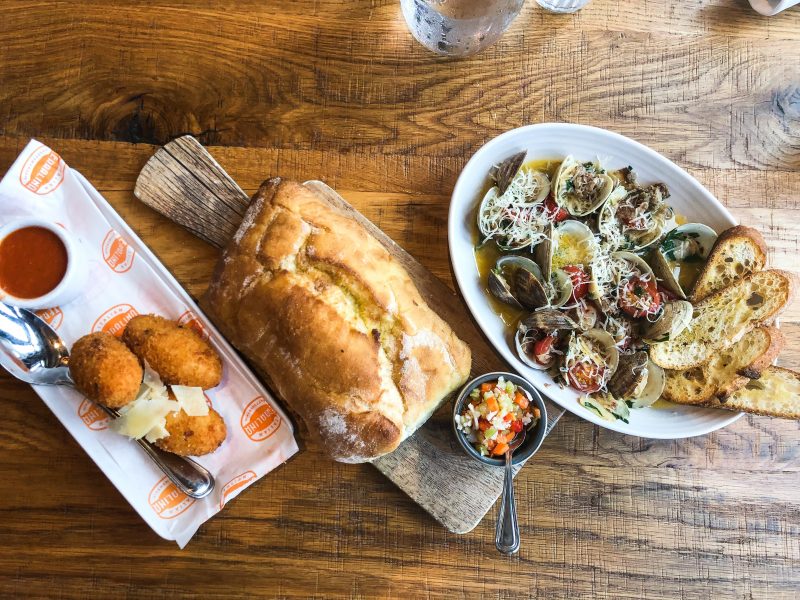