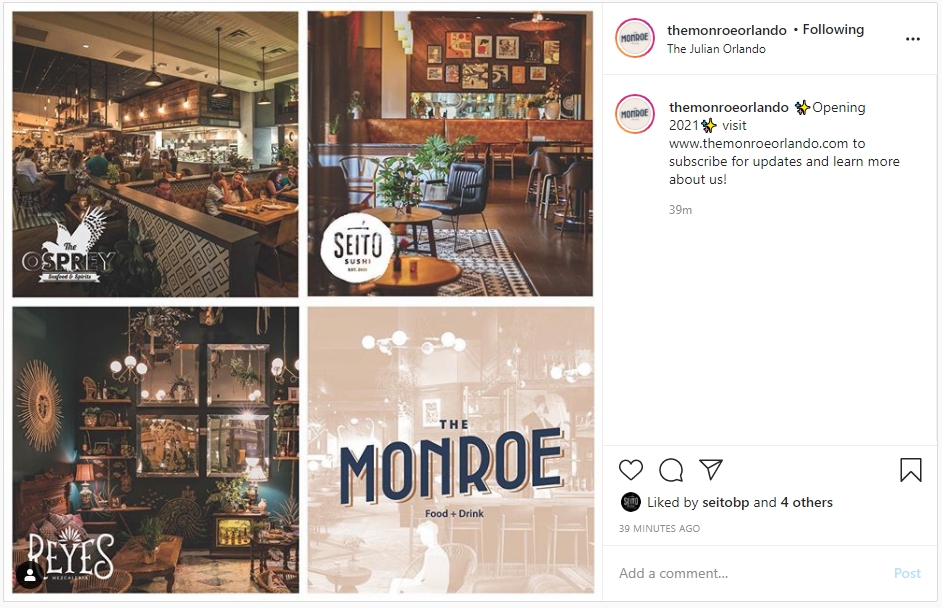 From the Press Release:

Jason and Sue Chin, owners of Good Salt Restaurant Group (which includes award-winning restaurants Seito Sushi Baldwin Park, The Osprey, and Reyes Mezcaleria), are excited to announce they will open a new concept on the ground floor of The Julian Apartments at Creative Village in Downtown Orlando.

The restaurant name is “The Monroe” and it is scheduled to open in 2021. The Monroe pays homage to Dr. William “Monroe” Wells, an African-American physician who opened the Wells’ Built Hotel in Parramore in 1926 as a safe place to be welcomed amongst friends and have fun. With his legacy in mind, The Monroe will be a mixed-use space of thoughtful dining, drinking, and socializing, including the main dining room, bar, lounge/study, semi-private dining area, expansive front porch and backyard patio.

Jason Chin, who sits on the advisory board of the Valencia College Walt Disney Center for Culinary Arts and Hospitality, plans to engage The Monroe in curriculum programs and grow the Central Florida culinary community through mentorship programs to attract and retain talent at the restaurant.

Jason Chin stated “We are very grateful for the support that Good Salt Restaurant Group has been shown over the years and are looking forward to being a part of the Creative Village community. The opportunity to participate in a project of this magnitude and potential does not come around very often and we are working hard to design and operate The Monroe as a diverse gathering place for the neighborhood.” Chin went on to say, “We are also excited about engaging and developing new talent in Orlando’s culinary community.”

The Julian Apartments is a new 14-story, 409-unit, $108 million apartment building that opened in August 2020. It was co-developed by Ustler Development, Inc. and The Allen Morris Company. Craig Ustler, president of Ustler Development, Inc., specifically sought out Jason and Sue to deliver the first full-service restaurant at Creative Village as the highly visible ground floor tenant at The Julian Apartments.

The Monroe Restaurant and The Julian Apartments are located at 480 North Terry Avenue in the heart of Creative Village in Downtown Orlando.