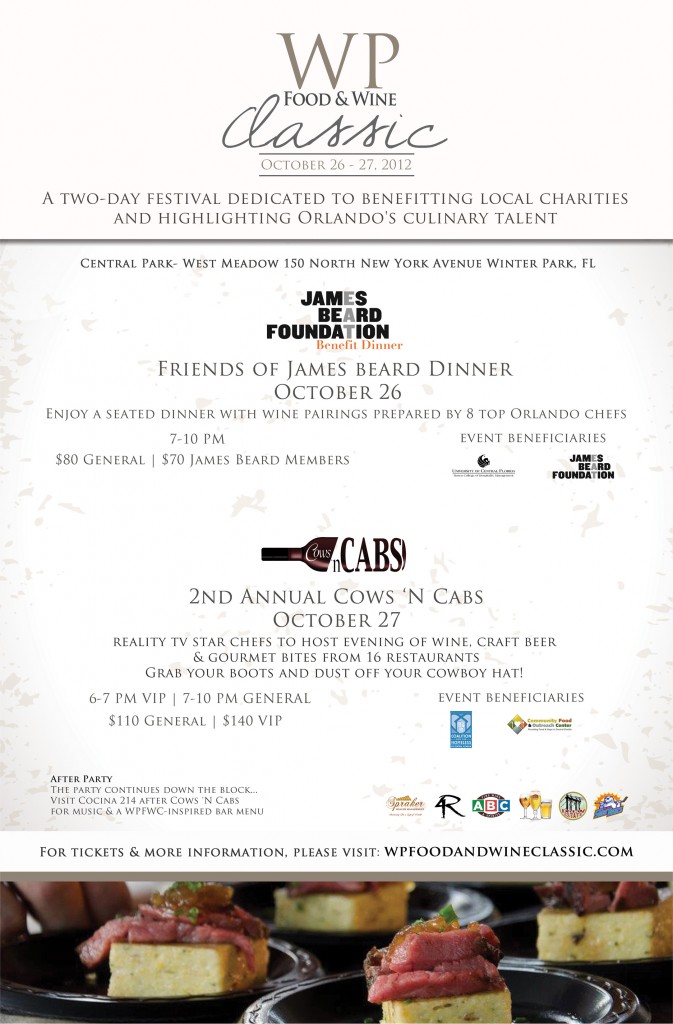 Kicking off the weekend is Friends of James Beard, a family-style dinner plated by eight of Central Florida’s most recognized chefs, including Rivers; James & Julie Petrakis of The Ravenous Pig; Henry Salgado of Spanish River Grill; Hari Pulapaka of Cress, Kevin Fonzo of K Restaurant; Brandon McGlamery of Luma on Park and Jamie McFadden of Cuisiniers. Limited to 150 guests, proceeds from tickets will benefit the James Beard Foundation and the UCF Rosen School of Hospitality Management by pledging a $7,500 scholarship donation. To further educate, Kris Moon of the James Beard Foundation will be in attendance offering guests a chance to learn more about the Foundation’s mission.

The following evening, the tent will transform to a rustic, western scene set for 400 guests for the 2nd Annual Cows ‘N Cabs (“CNC”), a food-and-wine walk around, which raised more than $40,000 last year for three local charities. Hosts for the evening include a chef-studded line up of personalities from the Food Network’s “The Next Food Network Star” including Nikki Martin of season seven, Orlando-based Emily Ellyn of season eight and along with recent Bravo TV’s “Chopped” winner Giorgio Rapicavoli.

Sponsored by Spraker Wealth Management and created with the vision of finding a solution to break the cycle of poverty in Central Florida, 100 percent of proceeds garnered from ticket sales and auction items from CNC will be donated to the Community Food & Outreach Center and Coalition for the Homeless. In addition to more than 16 restaurants serving including Citrus Restaurant, deep blu seafood grille, mi Tomatina and Peterbrooke Chocolatier of Winter Park, guests will also have the chance to experience more than 100 wine and 60 craft beer tastings, enjoy live entertainment and a silent auction .

Sipping for the cause continues at Cocina 214, the host for the Official After Party directly following CNC and ends when the last drink is poured. The late-night event will feature a 30-minute autograph session from the celebrity talent at 10 p.m., music and a WPFWC-inspired bar menu. Ten percent all of sales benefit the Classic’s beneficiaries.

All-Access Weekend Pass: $190 (Admission to Friends of James Beard dinner, VIP at Cows ‘N Cabs and the Official After Party)

Where to Watch the UCF-Penn State game from Dublin, Ireland in...