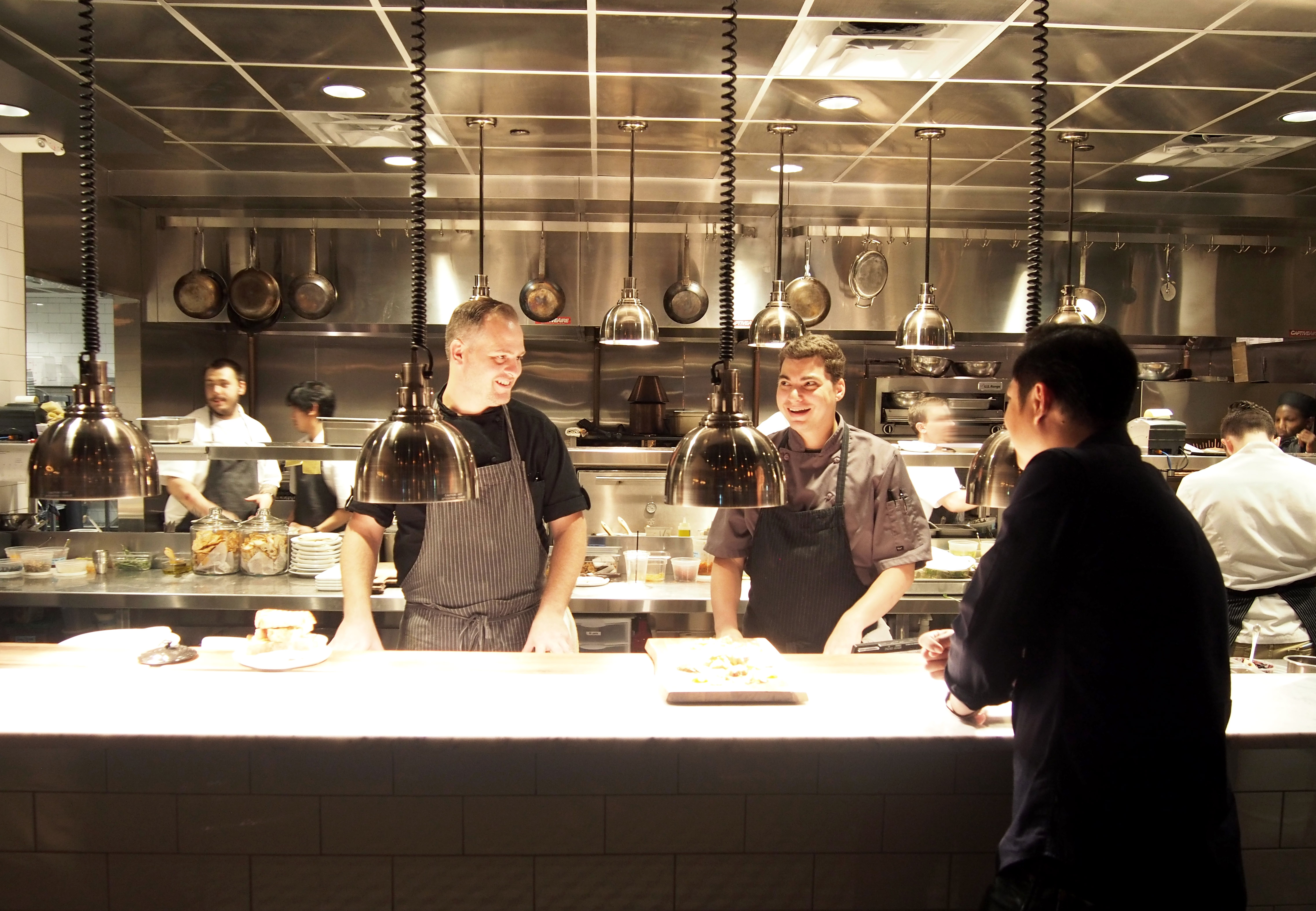 Chef Joseph Burnett of The Osprey Tavern in Baldwin Park was recently awarded the accolades of Best Chef and Best New Restaurant by Orlando Magazine.

“In order to create a productive kitchen that works, hammering and pounding, like a blacksmith to metal, is the wrong approach. Cooks and chefs need nurturing and discipline, but this is about the long haul. A kitchen is a garden and what it needs is gentle guidance. Each kitchen and each chef is unique, some flourish with a more hands on approach and others with a more laid back one. They don’t all grow at the same pace or with the same tenacity, but it takes a lot of careful manipulation to create something and someone that can produce.”

I didn’t expect this kind of patient, methodical, even somewhat spiritual rhetoric from such a stoic looking man. “You’re comparing managing a kitchen to tending a garden?” was my initial reaction when Joseph Burnett told me his approach to being an executive chef.

And the more time I spent watching him, the more I realized that he molds these young minds much in the way he constructs a dish. He works the kitchen the same way he works over an item, taking care that each ingredient/chef is utilized so that it tastes/works the best and each plays its own integral role in everything tasting delicious/coming together.

It’s so meticulously orchestrated that if you aren’t paying attention, you could easily miss it. The management of The Osprey Tavern’s kitchen is as artistic as the food it’s putting out.

I sat down with Chef Joseph Burnett to find out more about where this artistry and thoughtfulness comes from, the journey it took to get here, and where he hopes it will take him.

Q. Where did your initial drive for cooking come from?

A. Well, very simply, my parents never had crap around the house. There weren’t any instant snacks to indulge in. Everything I wanted to consume or share with friends, I had to prepare myself, so that’s what I did. We also had a food-centric household. My mother, grandmother, and aunt were constantly cooking so I started with them at a young age.

Q. Where did your professional culinary journey begin?

A. I started washing dishes at 15, and then I was a line cook. I did catering and coffee for a while. I moved to Boston and got a degree in graphic design. After school, I just wanted to be back in a kitchen, so I made a list of best restaurants in Miami, applied, and was hired at my top choice-Norman’s. My wife, Viviana Alestor, and I then made our way up to Norman’s Orlando. I was sous and eventually chef de cuisine there.  I tried my hand at Loews Hotels to see if I enjoyed the corporate hotel aspect of cooking. I didn’t. Shortly after, I became chef de cuisine at The Ravenous Pig where I was allowed to cut my teeth. Finally, roughly a year ago, I ventured to Osprey. 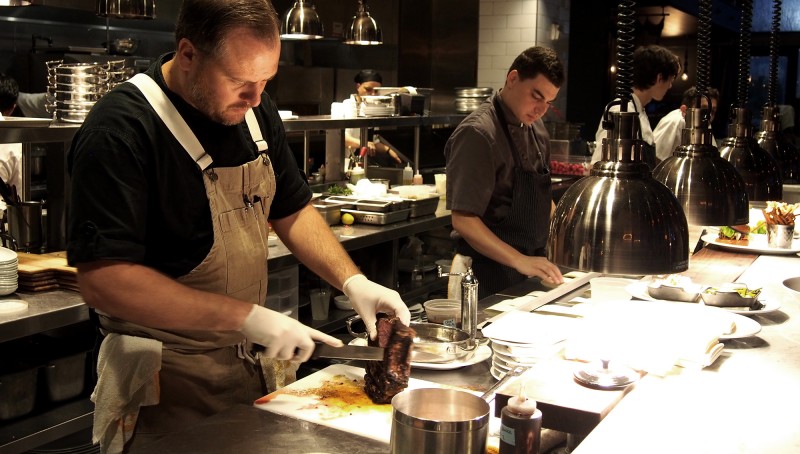 Q. How was your transition to Osprey?

A. Difficult and great. I hit the ground here running. There were some things that needed to be changed immediately, and others that took more time. It was a team effort getting Osprey to where it is now. Initially, there wasn’t anyone here I trusted. It takes a while and is difficult to get to know someone and develop the trust that comes from the long haul in an intense environment. Elek Kovacs (chef de cuisine) joining the team was a relief.  I couldn’t think of anyone I’d rather have by my side. We worked together at Norman’s and later at the Pig. There wasn’t a task you could give him that he didn’t complete faster and better than what you envisioned. His attention to detail is unparalleled. We are creative in different ways. It took me years to train myself to be organized. For Elek, the organization is more engrained which makes his implementation flawless.

A. I had worked under national and local celebrity chefs and I felt like it was time to be on my own. Jason allowed me that platform (Jason Chin owns The Osprey Tavern, as well as Seito Baldwin Park). I admire him. I admire his business sense and his ability to take a vision and bring it to fruition. 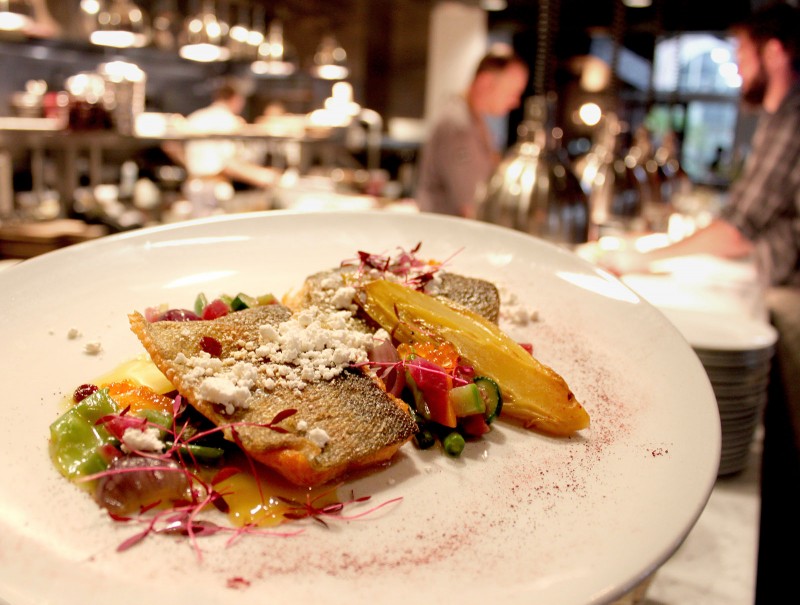 Q. Is this style the culmination of what you want to be doing?

A. The style is perfect. I get to mix in ethnic food and comfort foods. I have the ability to work with great ingredients.

Q. How do you continue to find the drive necessary to maintain the quality of your work?

A. The challenge drives me and it’s always challenging. If there’s not challenge, you’re playing it too safe.
There are very few art forms where the result is seen in just a few hours. And although a lot of things we do can take several months for end results, quite a few are fairly quick and the satisfaction is there.
There are also even fewer forms of art that sustain life. And as an artisan it’s incredible to create something that is visually appealing, as well as something that nourishes you.

Q. Do you ever feel stagnant? How do you get yourself out of that rut?

A. It’s a very intense creative process. Sometimes I think, as so many others, “I’m never going to have another great idea again.” Then something stimulates me, another chef, nature or, another art form triggers something within me. Sometimes these ideas come too quickly to act on and of course, it’s not always a reliable process, but I have a great team that I can lean on and their fresh eyes help. Our paths will intersect, like a brain trust and any block is removed by what we can create together.

Q. What words of advice could you offer to aspiring chefs?

A. Be humble. Start from the bottom. Stay out of culinary school. It’s harder at first, but ultimately an easier route. You’ll avoid a ton of debt to pay off. You will learn the technical tools required on site, as well as all the rest.

Q. Tell us about how you learned on site.

A. My first time in a kitchen, I had one knife to bring to the table. I didn’t know culinary terms like c-fold or hotel pan. I would write down what I didn’t understand and go home and look it up. I wasn’t going to be made fun of for a lack of knowledge. “Food Lovers Companion,” and Harold McGee books were my reference system. “Becoming a Chef,” was my spiritual and philosophical guidance.

Q. What keeps you humble?

A. I think the mentality a lot of chefs keep, myself included, is that “you’re only as good as your last dish or your last service.”

Striving to constantly make myself better is grounding.

You see egos in kitchens, people who think they’re great and they usually fall flat where it counts. I don’t want that ego. It’s the death of creativity.

Q. Most people don’t pair artistry with management. Is leading a team something that you ever wanted?

A. Certainly. I enjoy the human aspect of it. I count myself lucky to be part of so many journeys. You can’t ever completely know where someone is headed and sometimes an artist comes out, flourishes and goes on to do the most incredible things. It can be frustrating at times, of course.  At this level, it’s a thinking man’s game. Leading a pack of “yes men” is not something I want. I want opinions that count. I want thinkers. I want them to question recipes, question ingredients, question delivery. I do not want a team of people going through the motions. Most chefs learn early with multiplying recipes that you have to question everything. One teaspoon of cayenne can multiply to one cup in no time, so an open door is everything. The kitchen is a crash course in psychology. You find yourself running into the same personalities, culling the herd to avoid drama and ego. Eventually, you tailor your approach to different people. Some are best set free and some thrive with discipline or a gentle mix of both.

Q. Do you ever find it difficult to comingle passion with business?

A. Yes. Ingredients that I love to work with are sometimes expensive and therefore not economically viable, for example, European white asparagus.
However, it’s becoming easier with the tremendous development of Orlando’s palate in last 10 years. If we would serve squab, some guests would see the little feet and flee the dining room. Now, guests are ordering second and third plates of chicken liver mousse.

Q. If someone doesn’t enjoy a dish on your menu, what’s your reaction?

A. I know that every dish or message isn’t for every person and I keep that in mind when something isn’t well received. But that doesn’t mean that I don’t take it personally and get angry or disappointed, initially. But it quickly transforms into a learning opportunity. We look for patterns in things. If something is constantly getting a bad reception then it has to change. If we failed as a team, it has to be addressed. But if it isn’t a common occurrence and just that a particular guest doesn’t mesh with a particular item, my mindset is “to each their own.”
Often guests want what they expect rather than our interpretation of a dish. It’s the classic “dish in quotes” dilemma. The quotes are suggesting there is riff on this and it may be whimsical and fun, but that’s not always suitable to where their mind has taken them and that’s quite alright.

Q. What gets you to work every day (other than your car?)

A. Creativity, building something.
People creating together is an incredible thing and it’s interesting to see what they are going to bring to the table each day.
I feel like I’m just beginning.

Q. What brings you joy?

A. My children. It’s always good to come home. No one is more proud of me than my kids. Sebastian, 7, and Isabelle, 3, call my crew “my friends”, and they aren’t wrong.

Q. What are your hopes for The Osprey Tavern?

A. I hope it will be another jewel in the crown of Orlando’s culinary scene.

There is no doubt in my mind that The Osprey Tavern is quickly earning its position as “another jewel in the crown of Orlando’s culinary scene.” While in it’s first year, Osprey went through many changes and growing pains, Chef Joseph never shied away from acknowledging its flaws or making the necessary modifications. He readdressed, regrouped, and represented whether it was to endure criticism or praise. The Osprey Tavern is clearly carefully tended. It is to be concluded that if as many people took the kind of approach to their lives that Joseph Burnett takes to his kitchens, the world would in fact be a much finer, kinder, and more delectable place.