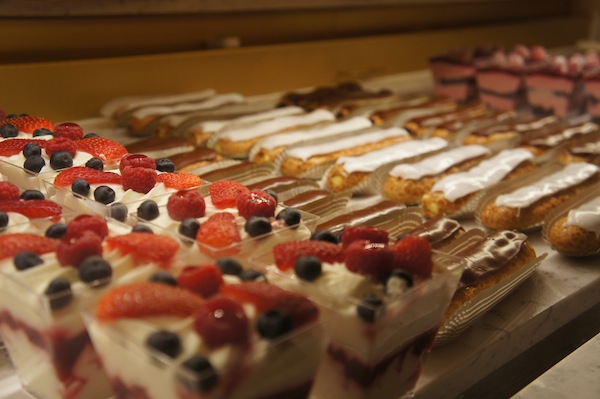 Les Halles Boulangerie Patisserie re-opened this past winter at Disney’s Epcot – France Pavilion at the World Showcase after being closed for quite some time for construction.

The original Boulangerie Patisserie was a small, a teensy bit cramp, but still a very popular spot for French pastries at Epcot.

The new digs are much larger, with an underground market type feeling, and bright, beautiful menus on widescreen TV’s, as well as mesmerizing display cases of pastries and sandwiches.

Upon entering, you are corralled through a hectic line to the front where you place your order with one of the young French exchange students staffing the bakery. The pastries shine from their display cases alongside pre-made sandwiches and quiches. Behind the counters you can see the young staff running about, prepping and toasting sandwiches, or caramelizing sugar on creme brûlées with blow torches.

I chose the Croque Monsieur sandwich – Toasted Ham and Cheese, but found to be a bit of a disappointment. The cheese on top was too burnt and overdone, the sandwich bread was a bit flavorless, and the ham within was a bit too salty. Maybe I should have chose from the list of croissant sandwiches instead, or just stick to the pastries.

I chose the multilayered Napoleon, truly a delectable, flaky and delicious treat and probably my most favorite rendition of the pastry.

Overall, next time I would probably try some more pastries, definitely the napoleon, and maybe some other sandwiches, definitely not the croque monsieur.

The napoleon – one of the best I have ever had

Cold sandwiches are available on baguettes

Croque Monsieur – The cheese on top was overburnt, the sandwich bread was a bit flavorless, and the ham within was a bit too salty.

Outside the bakery is the seating area

The crowds can get a bit crazy here in France