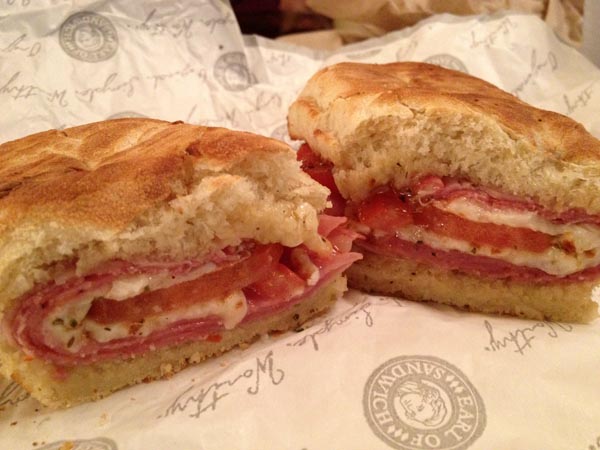 Normally I wouldn’t touch the often dreaded tourist areas of town with a ten foot pole unless there is some event going on or a friend is in town who – of course – is staying near the Disney/Universal Studio resort areas. It’s not that the areas don’t have some attractive venues, it’s just the crowds and the traffic sometimes are so hectic it’s not worth the bother. This latest visit to the Disney area was courtesy of an old friend, spoken word artist and director of the Boston Chinatown Neighborhood Center, Giles Li, in town with his lovely wife and twin children for some Disney park fun. We decided to meet up near the Downtown Disney area with my friend Nathaniel in the evening after their time at the parks.

Downtown Disney is a part of the Disney World complex, and the place was literally crawling with thousands of family and children on this weeknight in February. There are a multitude of restaurants and street attractions, all very convenient for an evening stroll after a day in the parks. The restaurants are mostly pricier due to the locale, but there is one place that has earned rave reviews for its quality and value: our old, dear friend, the Earl of Sandwich located on the north east end of Downtown Disney.

Legend has it that the first sandwich was named after John Montagu, the 4th Earl of Sandwich. Often found gambling, he did not have time to have meal during the play, so he would ask his servants to bring him slices of meat between two slices of bread during his long hours playing at the card table. This habit became well known among his gambling friends and thus the ‘sandwich’ was born. According to the Watch-Me-Eat blog, the Earl of Sandwich here at Downtown Disney was actually founded by the real-life descendent of the original Earl of Sandwich along with one of the founders of Planet Hollywood.

The hot sandwiches, as its namesake, are the draw here at the Earl’s, and at $5.99, they are a great bargain for the family. Inside, there is a line up system – the same familiar one perfected by Disney at its parks – where customers move through to the cashier to give your order.

My exchange with the cashiers wasn’t the most pleasant as they all seemed to be rushing people to order and move along in the assembly line. I didn’t even get a chance to look beyond the list of sandwiches that they served before I had already somehow ordered, given a number, and moved along down the line. In many ways this place is like Subway’s, though unlike at the Earl’s, the folks at Subway’s always asked you if you wanted a combo or drink or something else with the meal. The ingredients are much better though at the Earl of Sandwich.

I ordered the Italian and my friend Nate ordered the Caribbean Jerk Chicken sandwich. My Italian was filled with salami, capicola, roasted ham, mortadella, mozzarella cheese, roma tomatos, and topped with a nice Italian dressing. The sandwich was definitely meaty, but my favorite part was the breading for the sandwich: it was crunchy and flavorful, probably the first time I had that type of bread for a sandwich. My friend enjoyed his Caribbean Jerk Chicken with roasted peppers and a spicy jerk sauce, though I found the sauce to be a bit too mild and not at all reminiscent of any jerk flavors found in the caribbean, but it was still a good sandwich.

Overall, the Earl of Sandwich is a great value sandwich shop for families visiting Downtown Disney and probably one of the better places that you can visit at Downtown Disney. For the price point, you probably can’t get anything better than the Earl’s. The decor is similar to a Panera Bread, with some nice touches resembling a British library. The ambiance is rushed and noisy, but it’s Downtown Disney, not Downton Abbey after all.

Menu at the Earl of Sandwich

“Don’t talk to me, I’m busy making your sandwich”

The sandwiches are wrapped in shiny foil, careful they’re hot.

The Italian sandwich was a crowd pleaser

Dessert at Ghiradelli’s down the way